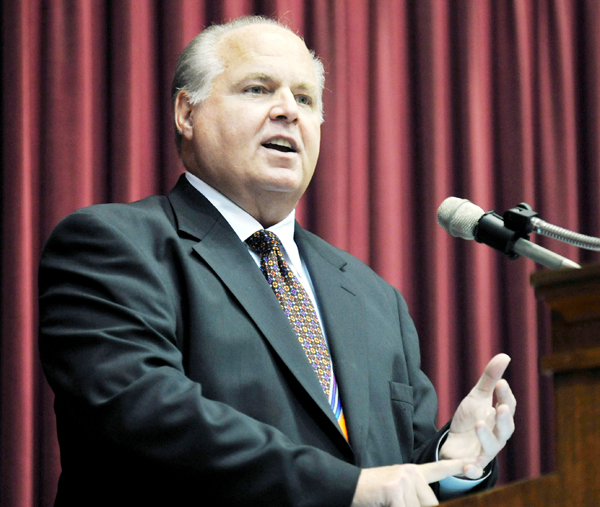 Rush Limbaugh won the Children’s Choice Book Award for author of the year for “Rush Revere and the Brave Pilgrims.” [AP/NEWSIS]

NEW YORK - Rush Limbaugh has won a children’s book prize designed to be chosen by kids themselves.

But that doesn’t mean all of his voters were young people. On Wednesday night, Limbaugh received the Children’s Choice Book Award for author of the year, defeating such superstars as Veronica Roth, Rick Riordan and “Diary of a Wimpy Kid’’ writer Jeff Kinney, the winner in 2012 and 2013.

The conservative commentator won for “Rush Revere and the Brave Pilgrims,” a book that landed high on the best-seller lists of Amazon.com and other outlets despite limited coverage.

From the moment Limbaugh’s nomination was announced, in March, conservatives were delighted, liberals angered and others simply puzzled - emotions only amplified by Limbaugh’s victory, which raised his book from No. 71 on Amazon the day before to the top 10 Thursday.

Nominees are selected by the most objective method possible, sales, while the winners are supposedly picked by kids, who vote online. But Executive Director Robin Adelson of the Children’s Book Council and Every Child a Reader, nonprofit organizations that co-founded the awards seven years ago, acknowledged Thursday that adults could easily vote and vote multiple times, a problem not uncommon for Internet competitions.

“Every one of our finalists gets fake votes every year,” Adelson told The Associated Press. “We like to think that’s the enthusiasm of adults who love children’s books.”

Limbaugh has touted his nomination on his radio show and on his website, www.rushlimbaugh.com. Adelson said Limbaugh initially enjoyed a wide lead, but that voting tightened considerably in the final weeks and the outcome was “fair and close.”

“It’s not as if he received millions of votes and everybody else received 10,’’ she said. “It was far, far closer.’’

Adelson said total votes this year only increased modestly, from 1.1 million to 1.2 million, and added that voting has generally gone up each year. She emphasized the awards have no mission beyond encouraging kids to read.

“We’ve received some hate mail,” she said. “We’ve been accused of endorsing and supporting Rush Limbaugh. We endorse and support children.”