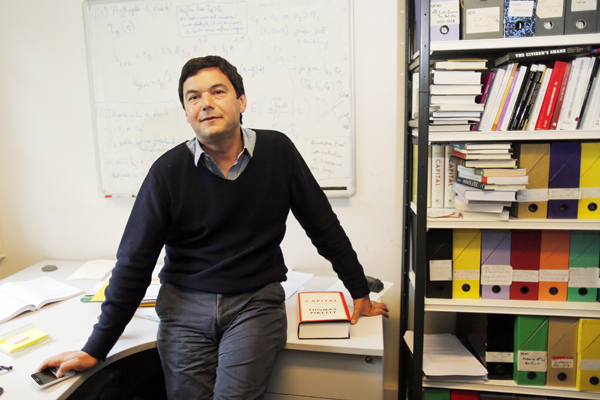 French economist and academic Thomas Piketty poses in his French School for Advanced Studies in the Social Sciences office in Paris. [REUTERS/NEWS1]

PARIS - “Capital in the Twenty-First Century” by French economist Thomas Piketty has attracted praise and invective alike on its way to the top of the Amazon.com books best-seller list.

New York Times columnist Paul Krugman called its findings on wealth dating back to the 18th century a game-changer that demolishes the myth that “great wealth is earned and deserved.” Time magazine’s latest edition features a picture of “le hot hand author” under the headline “Thomas Piketty: Marx 2.0” - a reference to the co-author of the 1848 Communist Manifesto whose later “Das Kapital” sought to explain how capitalism worked.

For Piketty, the statement “r is less than g” - where the rate of return on capital (“r”) outpaces economic growth (“g”) - is the “fundamental inequality” underpinning much of the work.

In his tiny office at the French School for Advanced Studies in the Social Sciences, the 43-year-old explains why wealth taxes and increased financial transparency could prevent an “endless inegalitarian spiral.”

Q. Briefly, why does r tend to be greater than g?

A. To some extent it is coincidence. But according to the textbooks, r is always bigger than g because otherwise people wouldn’t save, they would just borrow indefinitely from future resources. But when r is substantially bigger than g, inequality of wealth tends to rise to pretty large levels.

So is inequality just a fact of life?

R less than g is just one possible force among many: the main conclusion of the book is that there are many forces going in all directions. History shows you have forces pushing in the direction of reducing inequalities - such as the transmission of skills and knowledge. But you also have forces in the direction of rising inequality, notably because of the tendency of the rate of return to exceed the growth rate in the very long run. This is particularly likely to happen if we have a slow-down in the growth rate, especially due to a slow-down in population growth. We can’t exactly predict what inequality is going to be like in the future, but we shouldn’t wait for some incredible coincidence when r and g match up before we do something.

We need to set up a system with more transparency about wealth so we can adapt our tax system and our tax rate to what we observe. If after all that, we don’t need very progressive taxation, then fine. But we shouldn’t wait for this to happen: there’s no pilot in the plane and we need to put one there.

What do you say to those who call you a “modern Marx”?

Marx’s main conclusion was that the rate of return would ultimately tend towards zero - that there would be a final catastrophe with a falling rate of profit. I don’t think there is any good historical evidence for this claim and there is no logical consistency behind it either. I don’t think there will be a big catastrophe, although it can raise political problems because the level of inequality grows.

What surprises did you come across in your research?

The main surprise is the return of what I call this patrimonial society with a high wealth-to-income ratio. When I read Balzac and Jane Austen I saw wealth everywhere and when I started working on this issue in the 1990s and reaping evidence in the 1980s, 1970s, I could not see the same large wealth as I could in these 19th-century novels. But finally I realized we were in the middle of a big transition and we were returning to the same kind of wealth-to-income ratio as before.

Are you surprised by the fierce debate your book has created in the English-speaking world?

There is a long egalitarian tradition in the U.S. and the U.K. - they are the two countries that invented progressive taxation in the 20th century.

One reason I think this is picking up quite well there is that there has been a very large rise in inequality in these two countries. Part of the reason why the U.S. in particular invented progressive taxation in the 1920s and 1930s was that at that time there was already a big concern about a rising concentration of wealth and political power. To some extent we are in a similar period now.

Is it touching the same nerve in Europe?

There the issues are less about rising inequality and more about the future of the welfare state and the future of public debt. Here the book is interesting because it shows we have already had much higher public debt than we have today and it is interesting to see how it was solved: in the 19th-century U.K. via fiscal surpluses but it took one century; 20th century Germany and France used mostly inflation to reduce their debt after World War II, which was faster - but destroyed a lot of private saving accounts which left us with big trauma.

Neither option seems that likely today, though...?

So what are we going to invent in the future if we don’t have inflation and we don’t want austerity for 50 years? I think a better solution is progressive tax on private wealth. It’s like inflation but it is more civilized because you can protect lower and middle-class wealth owners and ask more of those who have more.

These issues are beyond left and right. What history tells us is that there is no easy way to get rid of big debt.

But many countries won’t risk going it alone with such taxes - and cross-border agreement on taxes is tough, isn’t it?

If you talk about a complete global wealth tax and global government that is not very realistic, but there’s a lot than can be done at a national level.

It is easier in large countries like the U.S., which has one quarter of world GDP. The United States can have the tax policies it wants and then put sanctions on Swiss banks if they want to get the right transmission of information.