Foreign workers on the rise in Eumseong County

Foreign workers on the rise in Eumseong County 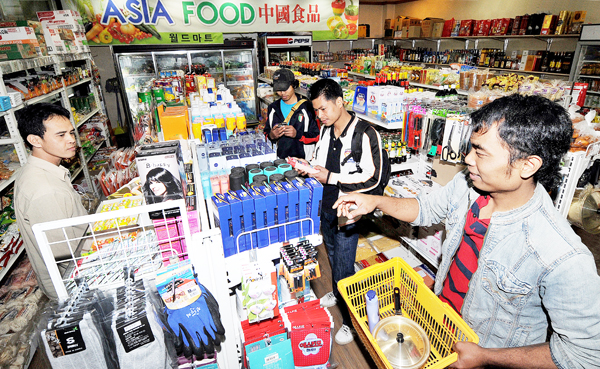 Foreign workers living in Daeso-myeon, in Eumseong County, North Chungcheong, shop for daily necessities in a nearby Asian food market. By Kim Seong-tae


Rapid population growth attributed to an influx of foreign workers has slowly begun to change the face of some regions in Korea.

Daeso-myeon, in Eumseong County, North Chungcheong, is one of those places, and the atmosphere in the area has noticeably transformed to accommodate the needs of its new residents.

The number of jobs, shops and services tailored specifically for this demographic has also led to a massive diversification of the neighborhood.

When Daeso and Daepoong Industrial Complex started hiring foreign workers, the number of non-Korean residents in Daeso District jumped last year to 2,049, according to the Eumseong County government.

For the past three to four years, most of the customers have been foreign workers employed at the industrial complex in Daeso-myeon.

“Most of the markets in this region won’t survive without foreign customers,” said Manager Lee Yeong-su, 49, who has run the market for the past six years.

He even took photographs of his foreign customers and attached them to the market door so other new residents would feel comfortable entering. Chinese beef, spices and canned foods are all displayed on the shop’s front shelves where they can be easily found, and other common snacks and ingredients can also be readily purchased in this area.

Misiksung, a Chinese restaurant in Daeso District near Osan Bridge, is crowded with Chinese workers on most days. It’s hard to get a seat on holidays without a reservation. Greetings as well as orders are both spoken in Chinese.

“Since most of the customers are Chinese, our employees can also speak Chinese,” said Jang Uh-geum, a manager at Misiksung.

Following an increase in foreign workers, the local industry changed, too. Out of the 1,900 enterprises in Eumseong County, 447 are in Daeso-myeon. Restaurants and grocery stores are concentrated in Daeso-myeon for its geographic advantage of being adjacent to the Jungbu Expressway.

The business district has also undergone a metamorphosis. The number of jobs jumped in the service industry, at food markets and at employment agencies. About 10 agencies currently operate there.

Real estate is also on the rise. It’s easy to spot advertisements here for one or two-room apartments situated around the road entering Daeso-myeon - an atypical sight in the countryside.

“Most of the customers used to be Korean before, but now most of them are foreign workers,” said Lee Jung-sik, a manager at one of the employment agencies.

“After earning some money, they move into larger spaces.”

The number of people living in Daeso-myeon nearly exceeded 20,000 last month, according to statistics of the Eumseong County government.

And among the nine administrative divisions in Eumseong County, it is the second-most populous. Daeso-myeon is an exceptional case because it has about half the population of typical counties, which average around 40,000 people.

Despite the changes, local Korean residents have become accustomed to the shift in their daily lives. About 20 stores sell food and household items for foreign workers in the monthly market.

Moreover, 55 out of 980 students in Daeso Elementary School come from multicultural families - the largest percentage in North Chungcheong.

“Followed by speedy regional development, the population rate has shown a tendency for growth,” said Jo Byeong-ok, the deputy governor of Eumseong County. “The county will create various policies for foreign workers to adjust more easily to life in Korea.”