Mongolian kids get their own place to learn

Mongolian kids get their own place to learn 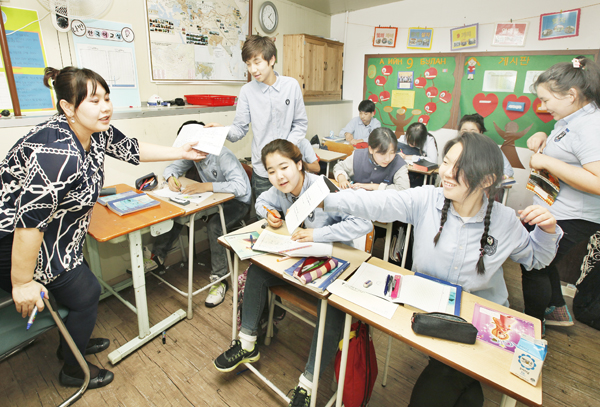 Children of Mongolian migrant workers in Korea study in class at the International Mongolia School in southeastern Seoul. The school was founded by a Korean pastor and his wife who worried about the lack of public education access for migrant workers’ children in Korea. By Park Sang-moon

The students, neatly turned out in sky-blue uniforms, chant from their textbooks. A typical classroom scene in Korea - except that the classroom is located in a former small apartment building. Some students in higher grades learn inside shipping containers next to the school. There are no playgrounds.

This is a school for children of migrant workers from Mongolia. Located in Gwangjin District, eastern Seoul, the International Mongolia School is the first and only Mongolian school accredited by both the Korean and Mongolian governments. It offers primary and secondary education in grades one through nine for 85 Mongolian kids.

Its curriculum is the same as for a school in Mongolia, and classes are taught in Mongolian, although students also take Korean-language classes seven times a week.

Ochki, a 14-year-old boy, is one of the school’s 85 students. He arrived in Korea with his family eight years ago. His father works in a factory. His mother works as a math teacher at his school. 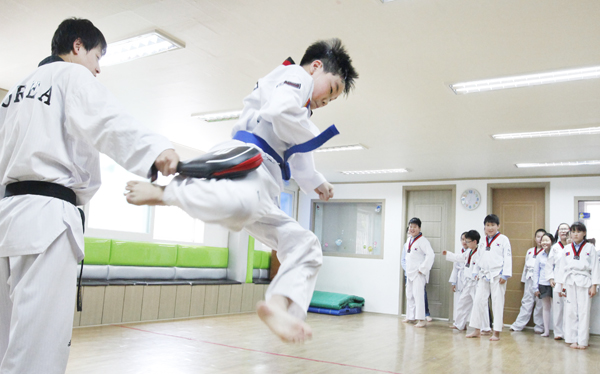 “There was no trouble adapting to the curriculum here because the courses are taught in Mongolian,” he tells a visiting reporter in impressively fluent Korean.

When asked whether learning Korean was a challenge, he replies, “Ever since I went to kindergarten, I’ve been learning Korean, and that has gone on through primary school. So it’s not hard for me.”

Lee Gang-ae, the school’s principal, emphasizes that teaching Korean is part of her efforts to encourage the children to learn more about their host country.

“They need to learn the culture and society of the country where they currently live,” Lee says, “and learning Korean is the basic step for that.

“Speaking Korean can be a great asset to each student and it can also have positive effects on Korea in the future. Even if the kids’ stays here are temporary, they will carry the experience with them wherever they live in the future.”

The school was founded by Lee and Pastor Yoo Hae-guen, a married couple that has long supported migrant workers from different countries.

“Unlike other migrant workers, Mongolian parents almost always take their children wherever they go,” says Lee. “In Mongolia, it’s important for families to stay together, which I believe is related to their nomadic roots.”

Korea is one of the biggest destinations for Mongolian migrant workers in the world.

With the constant influx, Mongolians have created a so-called Mongol Town in Dongdaemun where they run restaurants and grocery stores along with other businesses for their compatriots.

But for Lee and Yoo, the increasing number of Mongolian migrant workers meant there were more children without access to education or other public services, and that prompted the couple to start the charity to educate young Mongolians.

The school’s origin dates back to 1992, when the couple offered free meals and language education to foreign workers from different countries, including China and Indonesia, in a mission center.

"At the time, Mongolian kids spent the whole day in the center because they had nowhere to go after their parents left for work,” Lee recalls. “They had nothing to do and just wandered around with their friends.”

It was not until the mid-2000s that children of migrant workers were allowed to attend local schools.

But even if the children are accepted into Korean schools, they often fail to keep up with the local curriculum because it’s too foreign to them.

“That led us to launch a small study session in 1999 to teach them basic Korean and other major subjects,” Lee says. “Back then, we had less than 10 students and studied in a tiny room in a basement in Gangdong District.”

As the number of students increased, Lee and her husband felt the need to apply for official accreditation from the Mongolian government, which would entitle them to state funding. In addition, the students that studied with them in Seoul would be able to claim credits if they returned back home to Mongolian schools.

“When families moved back to Mongolia, the schools didn’t accept their credits for the courses taken in Korea because we were not an accredited school,” Lee says. “And the students had to start all over again.”

When it received the couple’s request for accreditation, the Mongolian government demanded the approval of the Korean government. The Seoul Metropolitan Office of Education was reluctant to give approval because it worried about illegal Mongolian immigrants, which were common in the 1990s and early 2000s. 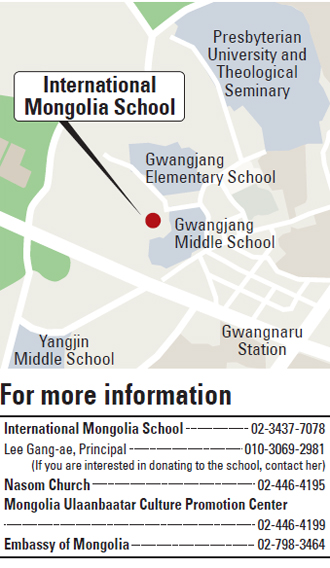 But the introduction of the Employment Permit System in 2004, a government-supported employment program, significantly brought down the number of illegal migrants, and the education office accredited the school in 2005. Still, the Foreign Ministry says that illegal workers accounted for 32 percent of Mongolian residents in Korea last year.

The International Mongolia School is an officially established school, but the couple still faces various challenges - in particular, a lack of funding.

“There is no official route to receive government subsidies,” Lee says. “We can apply for welfare support programs for migrant worker children, but that doesn’t ensure funds to run the school.”

The school charges 1 million won ($975) a year for tuition, but the fees are far from sufficient.

Because of its limited space, the principal has had to turn away Mongolian children and teenagers wishing to study.

However, a glimmer of hope found its way to the couple when the Seoul city government decided to offer a new, bigger site for the school.

The new building is scheduled to be completed by July, but the school is struggling to pay construction fees each month.

“We are relying on charity,” Lee says. “For this month, I’m not sure whether donations are enough to keep construction going. But I believe that we can manage to get through the financial troubles because we’ve come far from small study sessions with eight students.”

The International Mongolia School is a central place for younger Mongolians to learn and socialize. For adults, Mongol Town in Dongdaemun is a focal point for a variety of activities.

If you come out of exit No. 15 of Dongdaemun History & Culture Park Station, you can spot the 10-story Mongol Tower, easily recognized by its sign boards with Cyrillic characters. Inside, there are 48 businesses catering to Mongolians and Central Asians visiting or living in Korea, including travel agencies, foreign exchange kiosks and Mongolian restaurants.

What is known as Mongol Town started as a cluster of money-changing shops used by illegal Mongolian migrants residing in Korea in the late 1990s.

The area has developed into a business hub and gathering place for many Russians and people from Central Asian countries such as Uzbekistan, Kazakhstan and Kyrgyzstan.

And although there are still Russian restaurants in the neighborhood, the Russian merchants largely left for China and have been replaced by Central Asians and Mongolians.