Man in the driver’s seat has Ford gaining ground

Man in the driver’s seat has Ford gaining ground 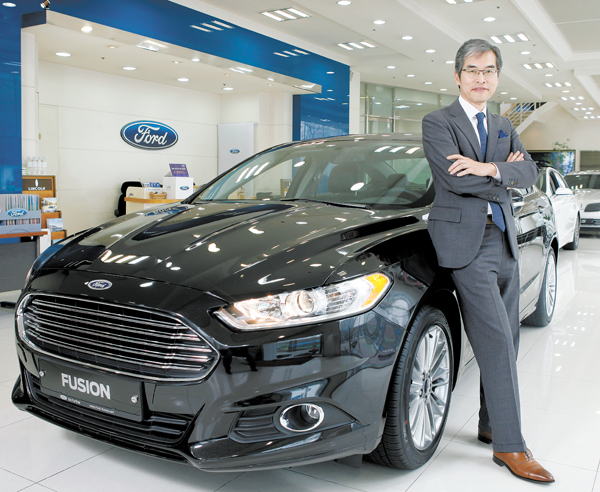 Ford Korea CEO Jung Jae-hee shows off a Fusion at a dealership in Samseong-dong, southern Seoul. By Park Sang-moon

Ford Sales & Service Korea CEO Jung Jae-hee is known as one of the fashionable gentlemen in the imported car industry. With a stylish suit and polished shoes, the 54-year-old always looks sharp, and that attention to detail carries through to his business style.

The 54-year-old Jung, who has been working for Ford since 1992, is regarded as one of the members of Korea’s first generation of imported car executives.

While imports have enjoyed more than two decades of growth in Korea, Jung knows there is still a long road ahead for Ford, which wants to reclaim the No. 1 position in Korean imported car sales that held in the mid-90s.

Leading Ford is not Jung’s only task. Since 2012, Jung has been chairman of the Korea Automobile Importers and Distributors Association (Kaida). He was re-elected for a second two-year term in March.

Since last year, Jung, who received an MBA from the University of Pittsburgh, also has served as vice chairman of the Korean Society of Strategic Management, chief vice chairman of the Global Companies CEO Association and governor of the American Chamber of Commerce in Korea. 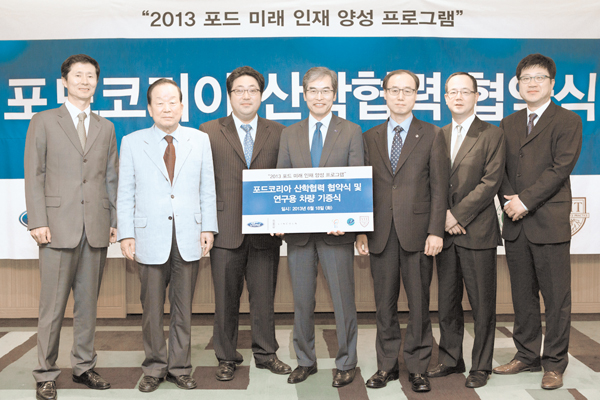 Jung Jae-hee and university officials signed an industry-labor collaboration agreement last year. Ford has been donating vehicles and parts to schools. Provided by the company

Q. Ford sales are going well this year. What’s your outlook for the rest of 2014?

A. Whenever I go to events and meet people, most of them tell me Ford has really changed. They frequently ask me, “Have the cars really changed that much?” and I say, “Just take one for a drive and you’ll know.” For this year, we didn’t set an aggressive sales goal, only to follow the industry growth rate. However, our sales for the first quarter outperformed that expectation. The new Lincoln MKC and Ford Mustang will be introduced in the second half of this year, but they are not volume models. We are striving for stable growth, rather than big spikes.

German models have been dominating the import market with diesel models. Does Ford Korea have any plans to compete with them?

Sales of diesel imports have been steadily growing and now account for about 70 percent of the import car market. We can’t ignore this. But as you know, Ford is a global automaker, and in Europe, Ford’s diesel lineup is strong. Ford Korea is considering introducing diesels in the midsize or SUV segments late this year, in addition to the Focus Diesel.

It seems the EcoBoost engine is a main weapon for Ford.

It is one of reasons for our growth the past two or three years. We have been able to increase sales even with diesels dominating the market. Ford actually brought diesels to Korea in 2008, but it was too expensive to comply with emissions regulations here. For sustainable growth, Ford then tried to find a way to improve gasoline engines and the EcoBoost engine came out. Its fuel efficiency is better than regular gasoline engines and while it is physically small, it is turbocharged to produce high power. It helped us to grow in a market dominated by diesels.

From left: Jung Jae-hee with winners of Ford Motor Company Conservation & Environmental Grants during the Eco Workshop program last year; Jung speaks at the Ford-Lincoln Korea Challenge Conference in February, designed to brief dealers and employees on the company’s business plans; Ford Korea’s “Sound of Fusion” project in 2012 was the first local automobile-art collaboration event to use sounds and visuals coming from the car.Provided by the company

What are your thoughts about electric vehicles?

I went to the EV Expo in Jeju last month and learned something I didn’t know. Although we talk a lot about EVs in Korea, the market is not even among the top 20 in the world. In terms of the environment, EVs are on the right the track, but I’m not convinced the technology is where it needs to be for wide acceptance. Some brands first used hydrogen fuel cells and then turned to EVs, while others were vice versa.

We need to carefully determine which is the right direction. It is true that EVs will replace combustion engines, but in terms of infrastructure and some technical problems, we still need more time.

What is Ford Korea’s strategy for the Lincoln brand?

Lincoln was founded in 1917 and it became famous as the “car of presidents.” I think when you talk about a premium brand, you can’t separate it from its tradition. Lincoln already has a tradition, but the point is how to express it with modern taste. The recently released MKZ is a model that shows the direction of Lincoln. It proves Lincoln has diversity and embodies advances in style and technology. And so far, the MKZ has been popular.

In addition, to express Lincoln’s brand identity, we also invested a lot in arts and cultural events. Facebook is another marketing tool to attract young people. When the new MKC is launched late this year, we expect the Lincoln brand will have even more appeal.

Ford CEO Alan Mulally was in Korea two years ago and emphasized the company’s One Ford strategy and the Korea-U.S. Free Trade Agreement. What has Ford Korea done since his visit?

After Mulally visited Korea, we grew a lot. Maybe we should invite him again (laughs). The One Ford strategy is basically strengthening our foundation, which is our product. It means enhancing the cost structure, technology and design of the product. In addition, we have put much effort into marketing to get the word out. Speaking about the Korea-U.S. FTA, we also have tried to offer benefits beyond the FTA. While the FTA levies some tax, we tried to give more discounts in addition to that. For example, for the MKX, we managed to trim 5.7 million won ($5,560) from the retail price. We also selected 160 auto parts that are frequently needed by customers and offered a 35 percent discount after the FTA. In addition, offering a warranty of five years or 100,000 kilometers (62,000 miles) was another measure.

I think that with our product enhancement, these kinds of efforts are bringing good results so far.

What can you say about Hyundai Motor and Kia Motors?

It’s been more than 20 years since foreign-made cars officially landed to Korea. As foreign brands brought various models, consumers had more choices. Now we see 25 brands marketing here. Hyundai and Kia have been experiencing this, and I think the presence of imported cars is boosting their efforts to be more competitive. Imported cars will probably account for 14 percent to 15 percent of the Korean passenger car market this year, but it’s not a big figure compared to other countries. I think people are psychologically pressured to see the rise of imported cars as a threat, but it isn’t. Through competition, everyone evolves and develops. We don’t have to have a dichotomous way of thinking that it’s either all about local cares or imports.

What’s your opinion on carbon taxes (subsidizing cars with low carbon emissions and taxing those with high-emissions), which the government is trying to introduce?

The purpose of the law is right because it’s about the environment. But we need to take a close look at a carbon tax. First, we should look at whether this new regulation would go against international trade rules like FTAs. In addition, we already have CO2 regulations for automakers and a new CO2 regulation will affect consumer purchasing decisions, which I think amounts to “double regulation” by the government. The important thing is not about what CO2 level should be or how much subsidy is given. I think it is a problem when such a regulation ties to artificially change people’s buying patterns. We should approach this issue very carefully from the beginning.

There are three virtues that I tell young people whenever I give a lecture. First, they need to have passion. You need something that can drive you. If there’s passion, people can concentrate, and when concentration reaches a certain point, it generates creativity. Second, they need to be sincere and take ownership. We know the difference between employees who do their work voluntarily and those who work only after receiving orders from someone. Last, but not least, is honesty. If employees are not honest in their work, they could damage an entire company’s reputation. Those who have these three virtues will be able to work for Ford Korea and anywhere in the world. 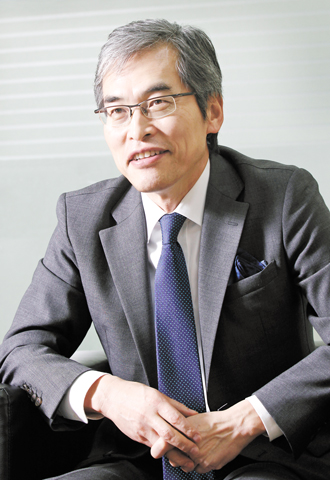