‘Soul Mate’ aims to give hope after Sewol

‘Soul Mate’ aims to give hope after Sewol 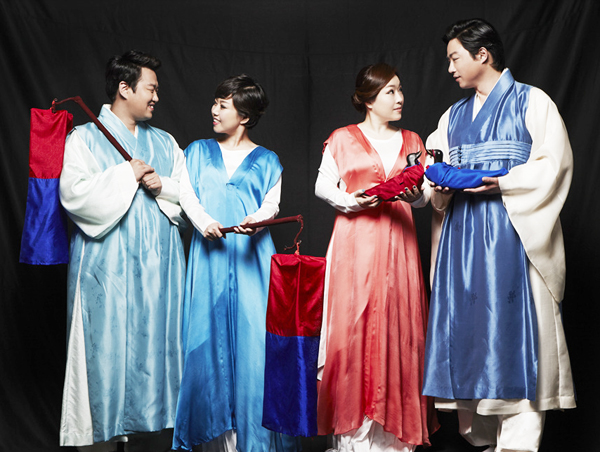 Original Korean opera “Soul Mate” will be staged by the Korea National Opera in the Opera Theater at Seoul Arts Center on May 31 and June 1. Provided by the organizer

“In a time in Korea when the whole public is witnessing hundreds of parents losing their beloved children and people losing their loved ones in the deep seas from the Sewol ferry disaster, we begin to notice the precious people around us and who our true ‘soul mates’ are,” said Seo Jae-hyung, director of a new production of the original Korean opera “Soul Mate.”

“I worked on this opera before the tragedy,” said Seo, “but I want to deliver a hopeful message to the audience that somewhere out there, there’s your ‘soul mate.’?”

The opera, written by Lim Jun-hee, first premiered not in its home country but at the Frankfurt Opera House, Germany in 2006. It was put on by the Korea National Opera under the title “Der Hochzeitstag” (The Wedding).

The opera illustrates traditional Korean wedding ceremonies and customs based on the 1943 play “The Happy Day of Maeng jinsa.”

When it premiered, the Korea National Opera said it was “critically acclaimed for the ideal blend of Korean culture and European formality.”

The opera debuted in Korea in 2009 with a different name, “Soul Mate.” For its new production with Seo at the helm, Lim made dramatic changes to the opera’s ending, working with writer Han Ah-ram to depict that a “true ‘soul mate’ is realized when two people value each other and make efforts to make it a relationship.”

Before the tweaks, main characters Mong-wan and Seo-hyang, who are from rich families, couldn’t become each other’s soul mates, but each of them fell in love with lower-class characters Ibbuni and Seo-dong.

In the new version, Mong-wan and Seo-hyang become soul mates instead.

“I hope this opera settles as the Korean original opera that expresses Korean aesthetics and Korean colors,” said Lim.

“When I first wrote it so that it could be staged in Germany, I thought hard about how to highlight the aesthetics of Korea. But this time, I wanted to emphasize the drama.”

Lim said she scratched her head for nearly a year to figure out why Koreans find original operas made in Korea so unattractive.

“I tried to make this opera fun,” said Lim. “I’ve worked hard with the director Seo and conductor Kim Duk-ki to make it as interesting as possible. It even has a twist.”

As the opera premiered in Germany and was also staged in Japan and China, attracting thousands of foreigners who don’t know about traditional Korean culture, Lim said she is “certain that expats in Korea will enjoy the show” as well.

“I want ‘Soul Mate’ to give Koreans positive energy and convey the message that every single encounter, tie and relationship is valuable,” said Lim.