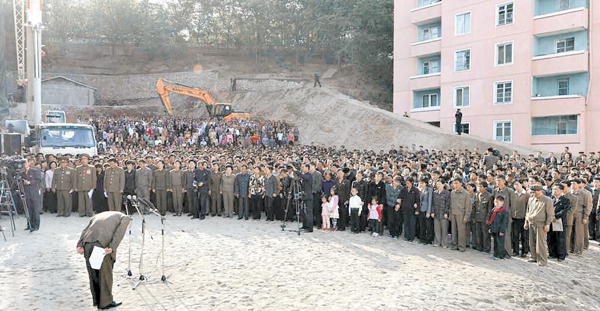 The yesterday edition of North Korea’s Rodong Sinmun shows an official bowing to the public as an apology for the collapse on Tuesday of a 23-story apartment building that was under construction in Pyongyang. [JoongAng Ilbo]

The regime issued a prompt apology for the accident.

According to the country’s Korean Central News Agency (KCNA), the apartment collapse, which it called a “serious” accident, had human casualties. The accident apparently occurred last Tuesday afternoon at a construction site in Ansan 1-dong, Phyongchon District, in southern Pyongyang.

There was no mention on the number of victims. But analysts estimate there could have been up to hundreds dead or injured from the collapse of the 23-story building.

The KCNA reported that the “construction of an apartment house was not done properly” and blamed irresponsible supervision and management by officials. It also offered “profound consolation and apology” to the victims and their bereaved families.

An official from South Korea’s Ministry of Unification confirmed the news and said that there was expected to have been 92 households in the building, as “it is common for North Koreans to move into buildings before construction is completed.”

The accident could have claimed the lives of a considerable number of people, the official indicated.

Each household is estimated to contain about four to five people, which could have left hundreds dead or injured. Because the accident was reported to have happened in the afternoon, it is unclear how many people were in the apartment at the time of the collapse.

Ranking officials, including Minister of People’s Security Choe Pu-il, visited the accident site to offer apologies to the victims and claim responsibility for the “unimaginable accident.” They also expressed regret for being unable to uphold the Workers’ Party policy of “love for the people” and putting people’s lives at risk.

The KCNA reported that “intensive” emergency rescue operations to save survivors and treat the wounded had concluded on Saturday.

It also said that North Korean leader Kim Jong-un “sat up all night, feeling painful after being told about the accident,” and instructed leading military and state officials “to prioritize the rescue operation.”

This could likely be seen as a move to distance Kim and the Workers’ Party from the incident. It is rare for North Korean state media to publicly admit to accidents or events that could paint the regime in a negative light. However, because this was a large-scale accident that happened in the capital Pyongyang, it is likely that it would have been difficult to conceal.

The Rodong Sinmun, the regime’s official mouthpiece, yesterday published a photograph of a North Korean official bowing to the people for the apartment collapse.

Analysts point out that there is likely to have been Pyongyang elite and leaders among the victims of the apartment collapse. In that sense, the public apology may be an attempt by the North Korean leader to appease any outrage among the elite and highlight his concern for his people. The swift apology may be the North Korean government’s way of contrasting how the regime handled the accident with how the South dealt with the aftermath of the Sewol ferry crisis.