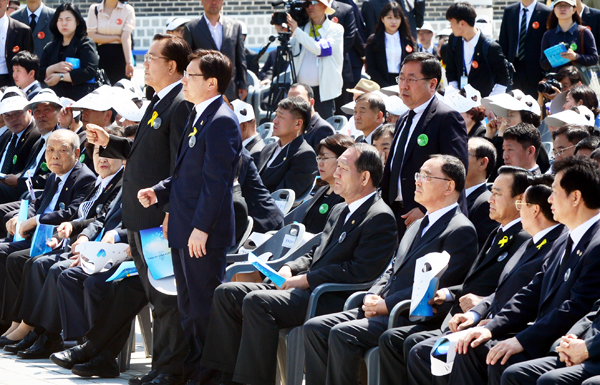 The government’s commemoration of the 34th anniversary of the Gwangju Uprising was held yesterday in its namesake city. But the event was overshadowed by an all-out boycott by the victims’ families and opposition politicians, who were protesting the rejection of a symbolic song as the event’s official anthem.

The ceremony was held at 10 a.m. yesterday at the May 18 National Cemetery in Gwangju, with lawmakers from the ruling Saenuri Party and outgoing Prime Minister Chung Hong-won among the approximately1,500 in attendance. But nearly half of the seats at the commemoration were empty, the result of an unprecedented boycott by the victims’ families and lawmakers from the main opposition New Politics Alliance for Democracy (NPAD).

It was the first time all the relatives of the massacre victims shunned the event. They decided upon the boycott after the Ministry of Patriots and Veterans Affairs decision refusing to designate the symbolic song “The March for Thou” as the event’s anthem, which reignited a controversy that flared last year over the same issue.

“The March for Thou” is mostly associated with the struggle for democracy, as it was widely used in pro-democracy street rallies in the 1980s by student protesters.

The song was composed a year after the May 18, 1980 Gwangju Uprising, which left hundreds of pro-democracy activists and ordinary citizens dead at the hands of military forces under the Chun Doo Hwan government.

The ministry’s decision prohibiting participants from singing along to the song with the choir during the ceremony also attributed to the wide boycott.

NPAD Co-chairmen Kim Han-gill and Ahn Cheol-soo skipped the government ceremony at the request of civic groups in Gwangju.

The opposition and bereaved families have long demanded the pro-democracy song be recognized. But the ministry has so far denied the request twice, claiming it is unprecedented for the government to designate a particular song as the anthem of an event.

Throughout the 10-day Gwangju Uprising, which lasted from May 18 to May 27, 1980, citizens took up arms and formed civilian militias, claiming control of the city. A bloody crackdown followed after the Chun Doo Hwan regime sent in special forces.

According to government data, 191 civilians died during the massacre, but civic groups and relatives claim that as many as 606 people lost their lives.