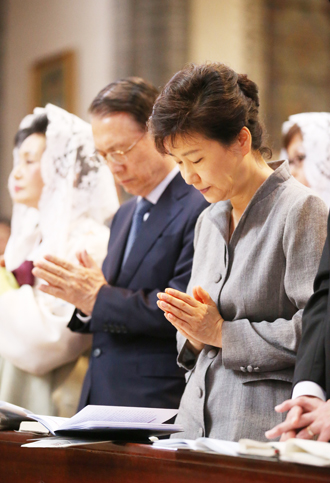 Labor unions and civic groups held a massive candlelight vigil rally Saturday in central Seoul demanding a thorough investigation into the Sewol ferry tragedy and strict punishments for those responsible.

The police estimated the number of protesters to be around 11,000 while organizers put the figure at 50,000, the largest street demonstration since the accident, which left more than 300 people dead or missing.

The street rally, primarily organized by the Korean Teachers and Education Workers’ Union and the Korean Confederation of Trade Unions, kicked off at 6 p.m. Saturday at Cheonggye Plaza in central Seoul, where rally members stood on stage to express their disapproval of the government’s handling of the crisis.

“Some criticize our rally for being anti-government and politically motivated. But how can we just stand and do nothing when hundreds of children are dying. We are just regular mothers angry over the sinking,” one woman said on stage during the rally.

Many parents with their teenage children in tow sat on the streets around the plaza during the demonstration.

Though the rally was organized by progressive civic and labor groups, ordinary mothers outraged over the sinking were at the center of the protest. The women, many of whom think of their own children in relation to the disaster, have come to be known as “angry moms,” a term that has sprung up nationwide online and offline to describe that demographic.

“I couldn’t just stay home because I felt too sorry. So I came out today with a stroller,” said Mrs. Cho, a 32-year-old mother who attended the rally.

She requested that her first name not be disclosed. “I know mothers [who take part in rallies] can be used as political pawns. But it is not only politicians who can influence politics,” Cho added. “I could not stand idly by when the country failed to save its citizens.”

Some protesters chanted anti-government slogans during the group’s march from Jongno-3 Station to Euljiro Station, including “Park Geun-hye must resign!”

The chanting raised concerns that the protest might turn into a politically charged rally, deviating from its original purpose calling for an in-depth investigation into the disaster and holding those responsible accountable.

More than 100 protesters broke away from the march - which had been reported to the police in advance - to head toward the Blue House and demand Park’s resignation.

The police took 115 protesters into custody on Saturday to question them over violating demonstration regulations. The Seoul Metropolitan Police Agency said it will charge 113 of them with illegally blocking a road and disobeying authorities’ orders to disperse.

Conservative groups also mobilized a rally on Saturday evening just one street across the Cheonggye Plaza to counter the first protest, which they described as a plan by leftist groups to exploit the Sewol crisis in order to undermine the government.

The police estimated the number of participants to be around 2,000, while organizers put the figure at 5,000. No physical clash between members of the two rallies was reported.