‘Shoes of Sharing’ event instills a spirit of giving

‘Shoes of Sharing’ event instills a spirit of giving 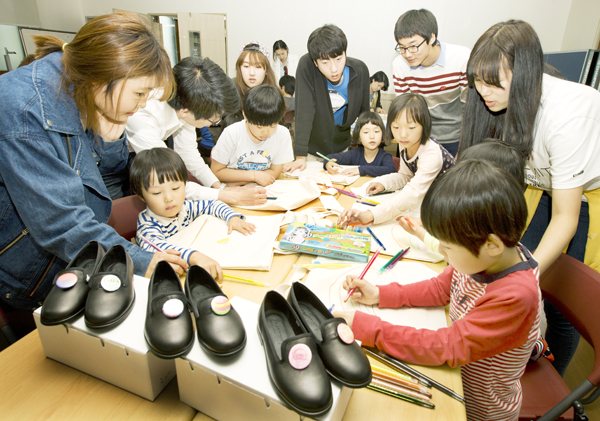 Children draw pictures on pouches May 10 at the Shoes of Sharing event in eastern Seoul. The pouches will carry the shoes they decorated. By Park Sang-moon


The event “Shoes of Sharing,” held May 10 at the Gangdong Dream Village in Gangdong District, eastern Seoul, was a milestone for the operators of the Laatikko Project, a non-profit charity project run by Hyun Joo-Sup, the founder of shoe company Laatikko Korea. The 27-year-old Hyun, who has arranged charity events in the past to give shoes to disadvantaged children in Seoul, invited recipients from previous events to take part in another.

“We have donated leather shoes to children living at orphanages or in socially disadvantaged conditions,” said Hyun. “They are used to only receiving help from other people, not giving, so I wanted to give them a chance to have an experience.”

Funded by the Story On Foundation, a group of children and volunteers gathered at the orphanage to decorate 20 pairs of shoes that will be sent to impoverished children living in Vavuniya, northern Sri Lanka.

Hyun began Laatikko Korea as a normal profit-making business. But he decided to run a chartity on the sidelines after being inspired by other business owners who gave up profitable ventures to help society in various ways. Hyun teamed up with two of his friends who were interested in the good-will activity and began the charity by donating five pairs of leather shoes to children in Yakkala, western Sri Lanka, in January. The shoes were delivered via a student trade mission from Myongji University, which Hyun once participated in.

In January, Wiki Seoul, a competition hosted by the Seoul Metropolitan Government for social projects, recognized the Laatikko Project and decided to fund it. With that support, the three could hold another charity event in which they brought together 34 donors and 65 disadvantaged children in Seoul received nice pairs of shoes.

“What children wear when they first go out into the world are shoes, and I believe experiences with the shoes I wore when I was a kid made me who I am today,” Hyun said. “I wanted to make those kind of shoes, which I believe are strong elements of their experiences.”

The 20 pairs of shoes decorated Saturday by seven kids and other volunteers will be shipped to Sri Lanka in June. The children who participated in the activity also adorned the bags that the shoes will be shipped in.

“Our main focus is to let those who received help from others give something in return, maybe just some crayon drawings for example, or make some donations,” Hyun said.

When asked of his dreams and goals, Hyun said, “I want to look for better options for charity and establish a foundation if possible. For now, I need to work on my business to keep the project running longer, but ultimately, I want to provide something fundamental that neglected people need in their society.”