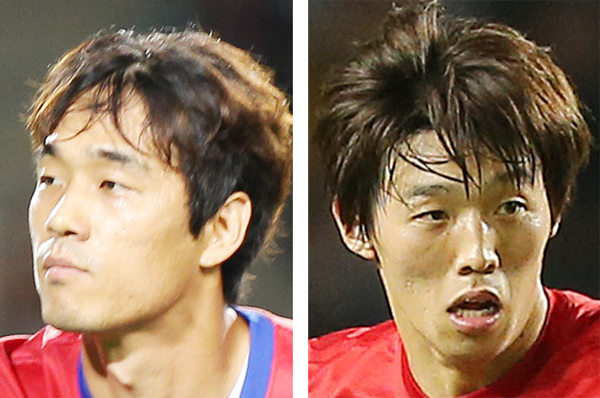 Number 10, which traditionally goes to one of the team’s best forwards, was taken by striker Park Chu-young of Arsenal. Many media outlets doubted coach Hong Myung-bo’s decision to include the 29-year-old Park because he didn’t play much for his club the past two seasons.

Park wants to prove he still deserves the 10 jersey and the World Cup will be the perfect stage to do that.

Since he hasn’t been one of Arsene Wenger’s attacking options for a long time, Park needs a strong World Cup performance to find a transfer club.

Seven is generally given to the team’s ace player - Cristiano Ronaldo of Real Madrid and Franck Ribery of Bayern Munchen - and the number was given to Kim of Cardiff City. The number holds a special place in Korean football history because it was on the back of former national team captain Park Ji-sung, who retired last week.

Park named Kim as his potential successor when asked who could be “the next Park Ji-sung” on the national team, but it is questionable whether Kim will be one of Hong’s best 11 players in the World Cup because his three attacking midfield positions are likely to be taken by “Sonsational” Son Heung-min of Bayern Leverkusen, Koo Ja-cheol of FC Mainz and Lee Chung-yong of the Bolton Wanderers in the 4-2-3-1 formation.

Judging by the jersey numbers, Jung Sung-ryong is likely to be the starting goalkeeper as he received one. Kim Seung-gyu got 21 and Lee Bum-young got 23.

Hong gave the team a three-day break starting Sunday, six days after players were called in for training at the National Football Center in Paju, northern Gyeonggi.

Players are due back at the center by 9 p.m. today.

Defender Kim Jin-soo of Albirex Nigata (Japan) will arrive in camp tomorrow due to flight schedules, and Yoon Suk-young of the Queens Park Rangers (QPR) might be delayed because of his team’s final playoff match this weekend at Wembley Stadium in London. If QPR beats Derby County, they will play in the English Premier League next season.

The three-day break was given so players who just finished their season or are in the middle of the season can have some time with their families, before the World Cup.

Coach Guus Hiddink, who led the national team in 2002 Korea-Japan World Cup, gave a surprise break after three friendly matches that were held about a month before the start of the cup.

Players at the time said the break gave them some slack time before the big event.