In the shopping street in Namdaemun, central Seoul, are some of the rare, intact two-story hanok (traditional Korean house) from the 1920s. The buildings highlight that Namdaemun has long been the city’s heart of commerce since the Joseon Dynasty (1392-1910). [JoongAng Ilbo]

The rapid urbanization and economic development of the 20th century ushered in a modernized Korea, but at the same time there has been growing talk of a dilemma between development and preservation as the years have passed by.

In fact, during the last few decades, most of the hanok (traditional Korean houses) in Seoul have been demolished. But recently, the city has started to recognize the historic and aesthetic value of hanok, especially those buildings consisting of two floors.

Even to some Koreans, two-story hanok are not familiar because traditional Korean topography, based on the balanced yin and yang theory, stated that it was unfavorable to construct multilevel buildings.

Moreover, as it was difficult to install ondol (the traditional underground heating system) on the second floor of a house, only a few hanok were built with more than one floor.

“In Bukchon, an historic neighborhood of Seoul, more than 1,000 traditional houses are well preserved thanks to citizens’ support,” noted Professor Ahn Chang-mo of Kyonggi University, adding that the lack of attention given to two-story hanok is concerning.

Using the University of Seoul’s recent research, Professor Kim Ki-ho found that there are only 22 units of two-story hanok still intact in the capital, which are heavily concentrated in downtown Seoul.

Meanwhile, the well-preserved two-story hanok in the Namdaemun shopping street, Jung District, signify that those constructions have been prominent since the Joseon Dynasty (1392-1910).

Nonetheless, the street in Namdaemun with the multilevel hanok faced the danger of destruction until a local conglomerate stepped forward to purchase its buildings. Taekwang Group, the company behind Heungkuk Life Insurance, stressed the “historical value” of the architecture. Vice President Shim Jae-hyuk remarked that his company is currently debating how to use the structures. 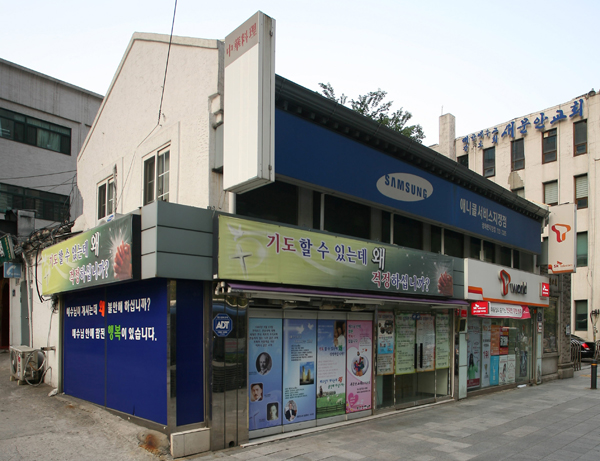 Built in the 1930s, this wooden structured two-story hanok, or traditional Korean house, in Sinmunno, central Seoul, might disappear as the local church that uses the space is considering a renovation.

But a nearby hanok shopping street in Sinmunno, Jongno District, is still looking for its savior. Built in the 1930s with a wooden structure, the two-story hanok has emerged as a hot issue as the local church using the building has decided to renovate it.

Though it is important historically to preserve such hanok, sometimes, due to practical reasons, the traditional buildings are left to deteriorate.

Seoul has been Korea’s capital for more than 600 years, and its long history has undoubtedly seen endless disputes between development and preservation.

In the 21st century, members of society are seeking ways to protect the historical relics of Seoul, with some also trying to adapt these buildings to fit modern culture.

But cultural preservation in Seoul has another problem: lack of resources and legal means of enforcement.

However well-intentioned the Seoul Metropolitan Government’s attempts to protect Seoul’s two-story hanok might be, it can sometimes bother the original owners and violate property rights.

Recently, Seoul city tried to purchase prominent writer Park Kyung-ni’s hanok in Jeongneung-dong, northeastern Seoul, under its “future heritage project.” Recognizing Park’s contribution to Korean literature, Seoul offered to pay 490 million won ($479,498) for the building, but the owner simply refused, saying that the house is worth more than 600 million won.

Considering that the Seoul Metropolitan Government’s culture sector budget is only 1 billion won, it seems unreasonable to expect the Seoul government alone to play the role of local hanok protector.

Today, negotiation to satisfy both landowners’ rights and the city’s policy to protect historical buildings is becoming more important than ever.

Kim Jong-gyu, the head of the National Trust for Cultural Heritage, notes that designating Seoul’s two-story hanok should come first above all, in order to prevent further destruction.

“After that, we can continue the discussion on whether to preserve or develop those historic buildings.”