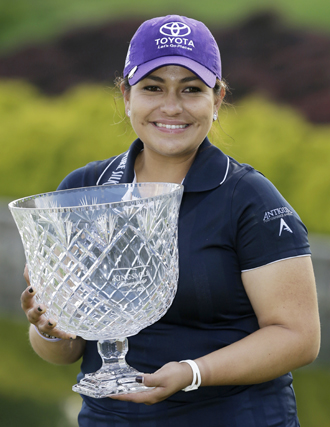 Lizette Salas didn’t have to wait long to be tested in her latest attempt at a breakthrough victory on the LPGA Tour.

The challenge came on the first hole Sunday in the Kingsmill Championship, after she was overly cautious with her first putt, leaving it nearly 10 feet short of the cup with a sliding, downhill test to save par.

She made it, the start of a day when she did little wrong on her way to a four-shot victory.

“Yeah, that was a big putt just to start off the day,” Salas said. “Downhill slider to the right. I mean, I even threw in a fist pump because I knew how important that was for me mentally and on a confidence standpoint.”

The 24-year-old Salas made it look easy the rest of the way, even while shooting just an even-par 71 on the River Course.

Salas started the day with a three-shot lead, doubled it with birdies on the par-5 third and par-3 fifth. A bogey on the par-4 eighth was her only hiccup - and only her third bogey in four rounds - until she three-putted the par-3 17th.

Salas was never really challenged in the final round on the River Course, and when her final putt fell on the 18th hole, she cupped her head in her hands and covered her face in celebration. Her winning moment was quickly interrupted, however, when four fellow players arrived and doused her with champagne, water and wine.

The victory came after Salas flirted with victory several times in her three years on tour. It also came after she missed the cut two weeks ago and realized she needed to change her mental approach to give herself a fighting chance.

“I felt like I wanted to be perfect all the time,” she said. “I felt like I needed to play like a top tier golfer every week. That’s not it. It’s about feeling confident. Golf is a sport where you can’t control everything. ... I just took a step back and looked at golf differently. I just tried to have fun this week. That was the most important thing.”

This year, she tied for third in the season-opening event in the Bahamas and shared the lead after three rounds in the Kia Classic in her home state of California, but Anna Nordqvist closed with a 5-under 67 - to Salas’ 70 - to win by one.

Last year, playing alongside winner Park In-bee in the final group of the Kraft Nabisco, Salas shot 79 to tie for 25th. Two weeks later, Salas lost a playoff to Suzann Pettersen in the LPGA Lotte in Hawaii. Salas chunked her approach into the water on the first extra hole after closing with a tournament-record 62.

The daughter of Mexican immigrants, Salas was introduced to the game when her father, the head mechanic at Azusa Greens west of Los Angeles, did some handyman jobs for the club pro and, instead of pay, asked him to teach his daughter to play.

She went on to star at Southern California, where she was a four-time All-America selection and helped the Trojans win the 2008 NCAA title.

The victory came on a rare weekend when her parents didn’t come to the tournament, but watched from their home in California, and it brought tears to the eyes of Hall of Famer Nancy Lopez, who has been a mentor of sorts for Salas.