No. 1 Djokovic defeats Nadal on clay

No. 1 Djokovic defeats Nadal on clay 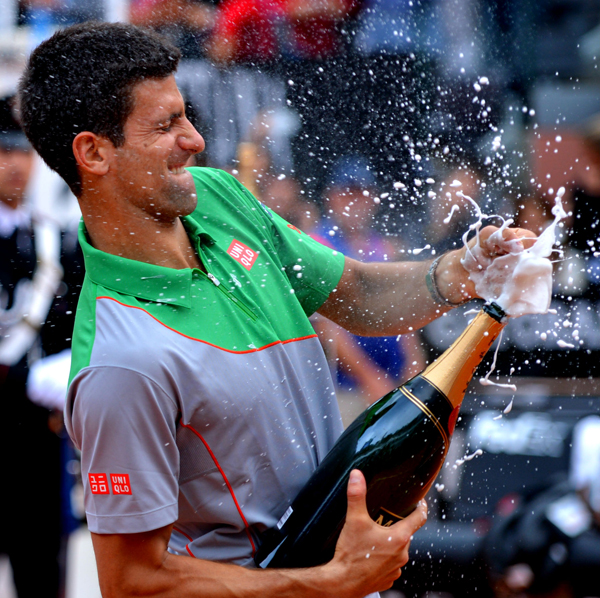 Novak Djokovic of Serbia sprays champagne during the award ceremony after beating Rafael Nadal of Spain at the Italian Open tennis tournament Sunday in Rome. [XINHUA/NEWSIS]

Novak Djokovic laid down the gauntlet ahead of Roland Garros when he came from a set down to dismantle clay court king Rafael Nadal in the Italian Open final on Sunday.

The Serb’s 4-6 6-3 6-3 victory was his fourth successive victory over Nadal, but only his fourth on clay in their 41-match head-to-head series dating to 2006.

After a slow start in which he twice dropped serve, Djokovic took control of the baseline rallies and finished the match with a flurry of precision groundstrokes that had Nadal reeling.

“Beating Rafa on clay is definitely a confidence booster,” Djokovic, who claimed his third Rome title and the 44th of his career, told reporters.

“Let’s hope it’s something I can take into Roland Garros.”

Beating Nadal in the French capital is a different proposition altogether but the way Djokovic managed to dominate the Spanish world No. 1 augurs well for his chances of completing his career grand slam next month.

He has won eight of the last nine sets they have contested.

“It’s been a great week considering where I was a few weeks ago with the wrist injury,” said an emotional Djokovic, who was making his comeback in Rome after injuring himself in the Monte Carlo Masters last month and missing the Madrid Masters.

“I tried to be aggressive from the beginning to the end. It didn’t work at the start, but I didn’t change the game plan and I found the right rhythm and everything started going in.”

Seven-time Rome champion Nadal had spent 10 hours on court reaching the final, including gruelling late-night wins over Gilles Simon and Andy Murray, and he looked powerless to stop Djokovic’s charge, although he did threaten a comeback in the decider when he broke back to 3-3.

Defeat for Nadal was his third on clay in a season for the first time in a decade and raised further questions about his form ahead of the French Open, which starts next Sunday.

Nadal hinted that his heavy schedule in Rome had been a factor in his defeat.

“Rome now is the past for me,” said Nadal.

“I have to start thinking about Roland Garros next week, and if my chance of playing well in Paris wasn’t very high a few weeks ago, now I think that I have a better chance.”

“When you play night matches you go to bed at three in the morning, which isn’t ideal ... it wasn’t the perfect schedule for me or for my tennis.

“I played three very tough matches and 10 matches in 12 days, so yeah I was a little bit tired.”

Nadal has dominated in Rome over the last decade and looked in no mood to surrender his title, breaking twice to lead the first set 4-1, showing no sign of fatigue.