Pacers beat the Heat in Game 1 of Eastern finals

Pacers beat the Heat in Game 1 of Eastern finals 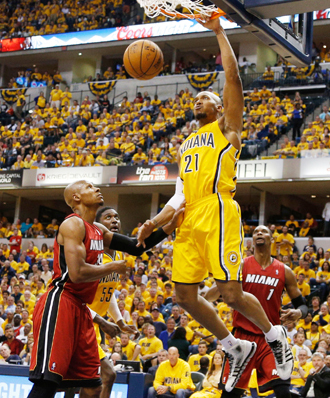 Paul George scored 24 points, David West had 19 and the Indiana Pacers protected their home court with a 107-96 victory over the Miami Heat on Sunday to take a 1-0 lead in the Eastern Conference finals.

Indiana led wire-to-wire and never even gave the Heat a chance to tie the score after starting the game with a 5-0 lead.

Game 2 is Tuesday local time in Indiana. The home team has won all five meetings this season.

Dwyane Wade scored 27 points and LeBron James had 25 for the two-time defending NBA champions, who lost for only the second time in 10 playoff games.

Indiana had a 30-point first quarter for the first time since Feb. 27, extended the lead to 19 in the third and Miami couldn’t get closer than nine the rest of the way.

For months, people wondered what happened to the Indiana team that had dominated the first half of the NBA season.

On Sunday, those Pacers suddenly reappeared.

Indiana swarmed the glass, exploited its size advantage, knocked down early 3-pointers with regularity and defended well enough to force the Heat to play catch-up the entire game. The fans that occasionally serenaded them with boos during the first two rounds of the playoffs spent most of the first half on their feet and finished the game with repeated chants of “Beat the Heat! Beat the Heat!’’

All five of Indiana’s starters and backup C.J. Watson reached double figures as the Pacers produced their highest point total of the postseason.

Indiana has lost Game 1 at home in its first two playoff series, but it was obvious right from the start that this game would be different.

George Hill scored the first five points to give the Pacers the lead, which they extended to 20-10. They spent the rest of the game either pulling away or fending off Miami challenges.

When the Heat trimmed the deficit to 30-24 after one quarter and eventually to 41-37 midway through the second, Lance Stephenson scored four points in a 5-0 run to make it 46-37. When James again cut the deficit to 50-45 with back-to-back baskets late in the second, the Pacers closed the half with five straight points to make it 55-45.

Then the Pacers poured it on.

Roy Hibbert and West scored eight of Indiana’s first 14 points to open the second half, making it 69-52.

James and Wade again rallied the Heat, getting Miami within 81-70 late in the third and 83-74 early in the fourth.