Companies increasingly use SNS for marketing

Companies increasingly use SNS for marketing 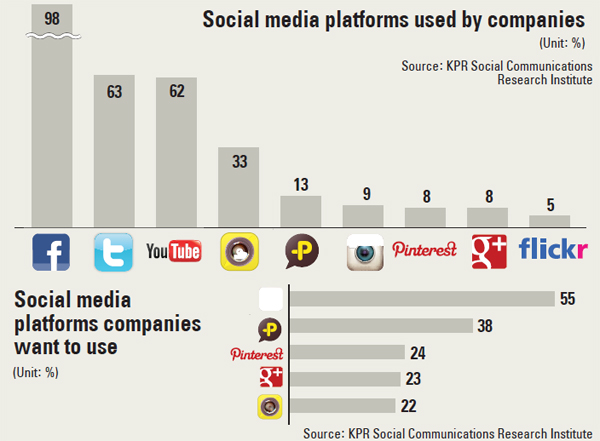 Domestic companies and public institutions chose Instagram as the social media channel that they think will be the most beneficial for marketing, according to a survey by a local research institute.

Despite an overall economic slowdown, companies were found to have increased their budgets for social media activities.

KPR Social Communications Research Institute conducted an online survey of social media personnel at 120 domestic companies and public institutions and found that 55 percent of those surveyed wanted to use Instagram as their next social media focus. Thirty-eight percent chose KakaoStory, while 24 percent said they wanted to use Pinterest, 23 percent went for Google Plus and 22 percent picked KakaoTalk Friend Plus.

According to U.S. market research company eMarketer, 1.61 billion people access a social network service at least once a month. This means about 22.6 percent of the world’s population uses an SNS.

The number of Facebook users in Korea exceeded 11 million as of December, and that of Twitter topped eight million.

Given the popularity of social media, companies and public institutions have decided to use social networks for marketing and promotional activities.

“As social media such as Facebook, Twitter and Instagram emerged, social marketing activities that utilize them have also become more active,” said a spokesman for KPR, a leading PR company in Korea.

That is why many companies and even public organizations have a team of employees to manage social media. Some large conglomerates run a separate division of social media experts.

Companies are focusing on social media for marketing because it has a far-reaching effect on consumers.

As the number of people who subscribe as fans of companies or products on social media increases, and the number of likes and shares of related content proliferates, the companies’ products will be promoted to many people.

Because social media allows companies to directly comminute with their consumers, it can be used to improve a brand’s image.

After joining the social media wave three years ago, GS Caltex, Korea’s second-largest oil refiner, has earned more than 190,000 fans on Facebook and 16,000 followers on Twitter by trying to make their social media content interesting through posts that include videos, pictures and inspirational messages.

Samsung Electronics actively uses YouTube to promote its smartphones and to clear its name as a copy cat.

It also cooperated with Facebook last year to organize “Launching People,” in which consumers post personal stories of what they have achieved using Samsung products. In return, Samsung gives money, expert mentoring and its products as a reward to consumers with the best stories.

YouTube use increased 19 percentage points since last year, KakaoStory use 23 percent and Instagram’s popularity rose 5 percent according to a survey in 2013.

“Despite slow economic growth, the important SNS PR trend is being expanded to more channels than just Facebook and blogs to YouTube, Kakao platforms and Instagram and differentiated managing strategies tailored to different channels are being created,” said Kim Hak-kyun, director of the KPR SNS Research Institute. “KPR Social Communications Research Institute is studying how to take advantage of SNS according to different social media channels and organizations’ needs and characteristics through substantial research.”