Kwang Dong began selling Jeju Samdasoo last year and ranked seventh in sales among domestic pharmaceutical companies for the year, entering the top 10 for the first time since the company was established in 1963. Its operating profit increased 22.2 percent while Nongshim’s fell 4.4 percent.

Sales of Jeju Samdasoo accounted for 26.9 percent, or 125.7 billion won, of the company’s total sales. Kwang Dong’s license, which lasts through 2016, allows the company to distribute Jeju Samdasoo to retailers but not to supermarkets or hypermarkets, supermarkets in conjunction with department stores.
Kwang Dong’s earning was Nongshim’s loss. As an alternative, Nongshim launched Baekdusan Baeksansoo, which features water from Baekdu Mountain, whereas Jeju Samdasoo comes from Halla Mountain. Although Baekdusan Baeksansoo was the fourth most popular water by sales last year, bringing in 25 billion won, its market share was 3.3 percent while Jeju Samdasoo held the top spot with 42.3 percent. 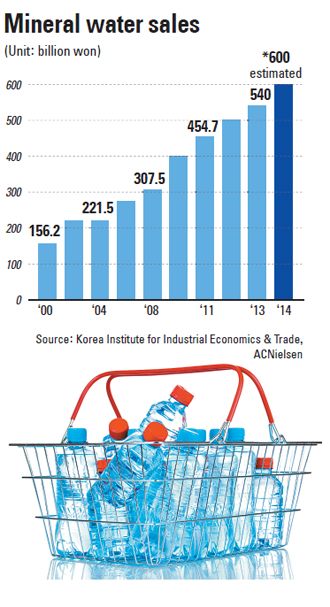 “Since Baekdusan Baeksansoo is fairly new in the market, we need some time to gain publicity,” said Choi Sung-ho, a senior vice president at Nongshim. “We plan to improve our production capacity and marketing strategy continuously.”

Nongshim purchased a 300,000-square-meter (74-acre) piece of land near its production facility in Yanbian, China, where it plans to double its production capacity by the end of the year.

Nongshim’s sampling events, new television commercials and advertisements at ballparks have been helping sales of Baekdusan Baeksansoo, with the company’s first quarter sales jumping 55 percent compared to the previous year. Sales of 2-liter bottles rose 26.7 percent and sales of 500-milliliter bottles soared 105.9 percent in sales. With its new product, the company aims to reach 200 billion won in annual sales by 2017.

In response, Kwang Dong Pharmaceutical and Jeju Special Self-Governing Province Development Corporation plan to solidify their product’s market share with a “10-10-10” strategy. The corporation received approval last year to increase the quantity of water it bottles from 63,000 tons to 111,000 tons annually. The company and the corporation predict that this will lead to a 10 percent increase in both sales and net profit.

But the fierce competition to sell bottled water goes beyond just two companies. Lotte Chilsung recently began promoting Icis 8.0 with the theme of “health in a cup.” Hite-Jinro’s mineral water brand, Seoksu and Puriss, spent 20 billion won to revitalize its production and packaging.

“We hope the renewal would increase our brands’ market share,” said Son Bong-soo, the Hite-Jinro’s president. Hite-Jinro wants to hit 100 billion won in sales this year.

According to E-Mart, mineral water was the fourth most popular beverage sold by the company in the past two years, but this year it has ranked first.

As mineral water becomes more popular, stores are promoting their own water brands by selling them at 20 to 30 percent discounts.

Mineral water companies base their products on the location where the water is collected and mineral components of the water. Nongshim hired a water quality analyst, Professor Shin Ho-sang of Kongju National University, to analyze 17 mineral waters sold at supermarkets.

According to the data, Baekdusan Baeksansoo and French mineral water Volvok have the highest content of mineral silica. Jeju Samdasoo purifies its water using basalt from Jeju Island. The product passed the U.S. Food and Drug Administration’s water test and the water test from the Japanese Ministry of Health, Labor and Welfare. It is also certified by the National Research Foundation and earned Hazard Analysis and Critical Control Points.