President Park Geun-hye sheds tears yesterday at the Blue House near the end of her national address in which she named each of the heroes who lost their lives trying to save other passengers as the Sewol ferry capsized in waters off the southwestern coast. This is the first time the president has been seen crying in public. [NEWSIS]

In a tearful apology, Park blamed herself for the sinking of the Sewol ferry on April 16 and took responsibility for the poor handling of the government’s subsequent rescue operations.

She also vowed to overhaul all the safety-related government organizations in the wake of South Korea’s worst maritime disaster, which claimed the lives of more than 300 people, most of them high school students.

“The ultimate responsibility for failing to handle the accident lies with me, as the president of this country,” Park said in a nationally televised speech yesterday morning. “I will make this an opportunity for the Republic of Korea to be born again, so that the sacrifice of those lives will not be in vain.”

The biggest reform measure is the dissolution of the 61-year-old Coast Guard, which rescued only 172 of the 476 passengers onboard the ferry as a result of slow and inefficient operations. 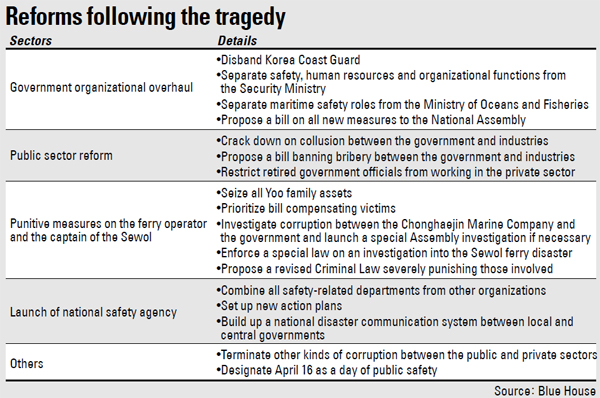 “Since the Coast Guard was launched, they have neglected to improve rescue capabilities or disaster management, only focusing on investigations [into maritime crime] and expanding the size of the organization,” she said. “The size of the Coast Guard has increased, but they have failed to raise their budget or improve maritime safety. They are lacking in life-saving discipline.

“I judged that, if these structural problems were ignored, we would not be able to prevent another large-scale disaster,” Park continued. “After thorough review, I made the decision to disband the Coast Guard.”

The two primary functions of the Coast Guard - investigating maritime crimes and rescue operations in conjunction with patrols - will be transferred, respectively, to the National Police Agency and the yet-to-be-launched national safety agency, the new authority in emergency management, the president said.

Since its launch in 1953 and its independence from the Ministry of Maritime Affairs, the Korea Coast Guard expanded to become Korea’s fourth-largest organization. It currently employs about 10,000 people and has an annual budget of about 1 trillion won ($979 million).

But the Coast Guard has long been scrutinized for its reclusive and ineffective management. So far, with the exception of its current head, only one of its 12 former chiefs had experience as a former Coast Guard official. The others came from the National Police Agency, and a quarter of high-level officials had no work experiences on patrol ships.

The two ministries will largely be reduced under the president’s reform plans, and all safety-related operations will be transferred to the new national safety agency.

The Security Ministry will also eliminate its human resource management and organizational roles, which will be transferred to another newly launched organization, informally called the administration reform agency.

The two new agencies, the national safety agency and the administration reform agency, will be under the control of the Prime Minister’s Office, according to the Blue House.

The Security Ministry, once regarded as one of the biggest and most influential organization in the country, will actually lose its two core functions and solely be tasked with basic-level administration in the central and local government.

The Oceans Ministry will only focus on maritime business and the fishery industry, Park said, while the Vessel Traffic Service, responsible for the poor communication between the Coast Guard and the sinking ferry, will be also disbanded and transferred to the national safety agency.

The president shed tears and her voice shook when she listed some of the names of the doomed crew members and the young high school students who died while helping other passengers in the aggressively listing ship. It is the first time Park has cried during a public address.

According to the Blue House, the new national safety agency will handle national disaster management and control all safety-regarding departments, separating them from the cabinet.

Accidents on land will be dealt with by 119 headquarters, the local government and other disaster-related agencies under the control of the agency.

Maritime disasters will be handled by a maritime safety headquarters under the agency, according to the Blue House. The headquarters will be based in four regions around the country ­- the west coast, south coast, east coast and on Jeju Island. For other disasters, a special disaster department will be launched within the agency.

The president said she would also soon propose a bill to the National Assembly to reform those government organizations.

On punishing the captain and others responsible for the sinking and compensating for the victims, Park pledged to propose a special law. For a thorough investigation into the sinking, she also proposed to launch a special investigation team led by the Assembly and private specialists.

The president’s plans for government reform, however, received mixed responses from the ruling Saenuri Party and the main opposition New Politics Alliance for Democracy.

Lee Wan-koo, Saenuri’s floor leader, supported Park, saying her decision was “shocking but broad” and “outside the box.”

The NPAD said that although the president offered an apology, she was attempting to quiet the case by pushing blame only on the Coast Guard.

“It was late that the president explicitly offered an apology 34 days after the incident,” Park Kwang-on, an NPAD spokesman, said in a statement. “By proposing an extreme plan to disband the Coast Guard, she appears to be assigning all the blame on the Coast Guard.”

The bereaved families of the victims also expressed concern about the disbanding of the Coast Guard, especially as operations to find the remains of those still trapped inside the ferry are ongoing.

Min Kyung-wook, the presidential spokesman, said yesterday at a briefing that the search operation will continue despite President Park’s speech.

“The president asked [the Coast Guard] to do their best to locate the missing passengers, up until they find the very last person,” he said.