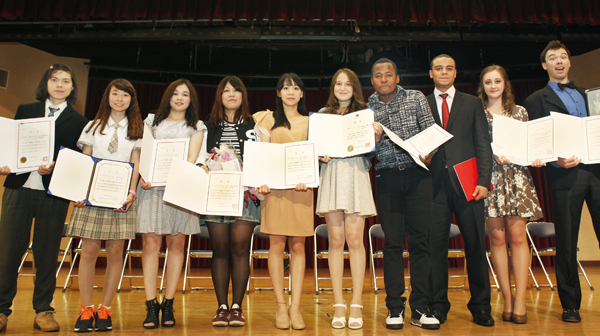 Those honored at the 17th World Korean Language Speech Contest for Foreigners pause for a photograph after the award ceremony on May 15 at Kyung Hee University in central Seoul. By Park Sang-moon

When Lobna Ashraf saw her first Korean drama, “Autumn in My Heart” (2000), in Egypt at 12 years old, she was moved by the heart-wrenching romance, set in a county she had never heard of some 8,850 kilometers (5,497 miles) across the world.

The story line of the series revolves around two characters, Yoon Eun-suh (Moon Geun-young) and Yoon Joon-suh (Choi Woo-hyuk), who grow up as siblings only to find out later that Eun-suh had been switched at birth with another baby.

She is separated from her original family after finding her biological birth mother, though the two are serendipitously reunited years later and fall in love. However, their romance is cut short when Eun-suh loses a battle with leukemia.

For Ashraf, who grew up in a strictly Muslim household where love was not openly discussed, the drama sparked her interest in Korean culture and ultimately inspired her to move to Seoul early last year.

“I thought Korean men were all like that - generous, sweet and caring,” she said with a sigh. Now 22, she is studying Korean literature as a graduate student at Yonsei University.

Rolling her eyes, she added with a wry smile: “I guess I had it wrong to expect this would be some kind of ‘romantic society.'”

Ashraf, who shared her story fluently in Korean, was one of the 15 contestants from 12 countries who talked about their experiences here at the 17th World Korean Language Speech Contest for Foreigners on May 15 at Kyung Hee University (KHU) in central Seoul.

One by one, they discussed culture shock and told anecdotes - how locals play boisterous games while drinking, rush to press the ‘close door’ button in the elevator as a “superman flies through,” and dash to the school cafeteria to get in the front of the line. The crowd, packed with foreigners, some in traditional attire, roared with laughter.

Ten contestants out of the 15 finalists received awards, with the highest honor given to Absadyk Onege, a 20-year-old student from Uzbekistan studying Korean language at KHU’s Institute of International Education (IIE). She received prize money worth 1.2 million won ($1,172).

“When I individually called them [the finalists] before the contest, I thought I was talking to a local,” said Yang Jung-ae, the chairman of the contest’s preparatory committee who works as a public relations officer at the IIE. “That’s how well they [speak Korean].”

In this year’s competition, hosted by the IIE, 1,232 foreigners from 38 countries applied. The number of applicants has steadily risen each year and hit 1,000 in 2009. The nationalities represented have also diversified and surpassed 40 last year for the first time.

Yang mentioned that the contestants’ Korean fluency is “skyrocketing,” as well.

“There are so many channels from which foreigners can learn Korean,” she said. “We’re surrounded with YouTube and Korean dramas, unlike in the past when [foreigners] physically had to come here to learn the language.”

In a country with approximately 1.5 million foreign residents, and 12 million tourists recorded last year, local educators say the sheer number of foreigners is no longer the defining aspect in discussing the Korean language’s appeal - what matters more now is how broadly it spreads.

“Up to a decade ago, approximately 90 percent of my students were from Japan or China,” said Kang Hyun-ja, a visiting professor at the Korean Language Institute at Keimyung University in Daegu. “Now, I’m seeing a pool of students from 70 different countries.”

Kang pointed to Korea’s improved national branding as the primary reason for this phenomenon. “One of my seniors at school recommended I learn Korean,” said Sami Jeong, one of the finalists who studies Korean language as a graduate student at Seoul National University. “He said Korea has a bright future ahead and that I’d have an advantage later when I apply for jobs.”

Jeong, from Egypt, insisted using his Korean surname, which accordingly refers to the identical Korean word that means the feeling of sympathy and love - something “you just don’t know before experiencing it from the locals.”

In order to nurture the Korean language’s rising popularity worldwide, educational institutions are reaching out to new areas as well.

A recent press release from the group showed that about 36,000 students were estimated to have received services there last year, up 25 percent from 2012.

Kang explained that students in the past studied Korean either to enter a Korean university or out of pure curiosity, which mostly came from Korean entertainment. Now, the list of reasons seems to have grown, with each individual having his or her own motivation.

“Engineers want to learn about Korea’s finest technology, and business students dive into the background of Korea’s economic development,” she said. “I can clearly see that these people are here trying to further develop their knowledge in their respective fields of study.”

Ashraf, who came to Seoul after being carried away by a series of local dramas, noted that she would like to translate Arab literature to Korean after finishing her master’s degree.

“I don’t see much Arab literature here in Korea, and it’s such a pity because people are missing out on so many fascinating works,” she said. “I want to promote those masterpieces by translating the books myself.”

Because the reasons for learning Korean have become more multifaceted among foreigners, local institutions have also worked to customize their programs to satisfy those goals.

Kim Jung-sup, the dean of IIE, emphasizes instructors’ role to that extent. At IIE, students are split up by language or learning purpose, and the teachers receive additional training to better understand the needs of their pupils and how they can tailor classes around those goals.

“That is the recent trend in Korean education,” Kim said, referring to the customization of classes, adding that other institutions are “following that trend.”

But no matter what the purpose is for learning Korean, the foreigners and educators interviewed all highlighted the importance of opening one’s heart and speaking the language in as many situations as possible in order to become a fluent speaker.

“I see some Westerners persist with speaking in English,” said Kang, from Keimyung University. “But [Koreans] have our fault in it too, because [Westerners] say that the locals are more amiable to them when they speak in English.”

Yves Oshiewa, 25, a contestant from The Democratic Republic of the Congo who attends the IIE, said his life in Korea has become more fruitful as his Korean-language abilities have improved. He recently registered for a Taekwondo class, and looks forward to water-skiing in the summer, which was all possible because he can now understand instructions.

“When you learn the language, you’re learning the culture,” said Oshiewa. “Before learning Korean, I couldn’t even eat kimchi. But now, I can’t eat my meals if kimchi isn’t on the table.”

Onege, the winner of the competition, advised those who wish to be fluent in Korean to “feel Korean from the heart.”

“I don’t look like a Korean, but I surely feel like one,” she said. “At the beginning, I thought locals were a bit strange. But now, I see them as decent people. It’s really all up to your mental attitude.”

As for Ashraf, she said she got over yearning for the kind of romance she witnessed in Korean dramas.

“You just can’t find that kind of passionate love in the real world,” she acknowledged.

When asked what virtues Korean men have over their Egyptian counterparts, she answered: “They’re really sweet. Egyptian guys are only like that to their partners - but here, men are kind to all women. I kind of like that.”