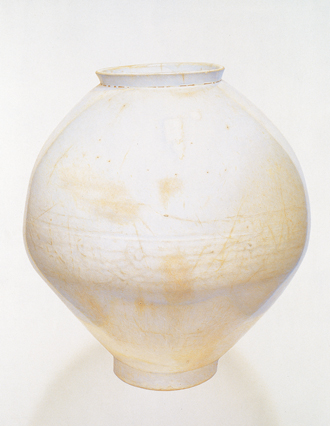 The “Korean Beauty” exhibition, which started at the National Museum of Modern and Contemporary Art’s Seoul branch on Saturday, also includes a series of photos of a moon jar by famed artist Koo Bohnchang. The images show a shadow over the moon jar darkening hour by hour, making it look like a full moon is setting.

Moon jars have been a favorite of modern and contemporary Korean artists and critics for decades. And some foreign writers have recently joined in with the love.

Best-selling author Alain de Botton introduced a Korean moon jar, along with many classic and modern Western artworks, in the book “Art as Therapy,” which he co-wrote with art historian John Armstrong. It was published last October.

According to the book, the white, plump jar shows “the ideal of modesty,” as it allows minor blemishes to remain on its surface and has an outline that does not follow an ideal oval trajectory.

“The jar is modest because it seems not to mind about any of this,” the book reads. “Its flaws merely concede its disinterest in the race for status. It has the wisdom not to ask to be thought too special. It is not humble, just content with what it is.”

The book’s view of moon jars shares commonalities with New York-based Korean contemporary artist Kang Ik-joong’s repeated remark, “I love moon jars as they are pure and have confident manner.”

De Botton also said in an interview with Britain’s Saatchi Art Magazine, “The works I like best are like a road map: I want my life to be like they already are. I felt this looking at the British Museum’s Korean moon jar.”

And it is well known that Kim Whanki (1913-74), one of Korea’s most important modern artists, loved and collected moon jars.

He depicted the jars floating in blue space like a full moon in the sky in the many half-figurative, half-abstract paintings he created before he converted to pure abstract art.

Kim was quoted by art historian Choi Soon-woo (1916-84) as saying “When I get writer’s block, I touch the butt of the big and handsome white porcelain jar beside me, then I suddenly become fluent in writing.”

Choi himself also loved moon jars, stating that they depict the essence of Korean beauty. He said, “The benign quality of moon jars’ round shape, along with their white color, shows they are so free from avarice and so pure with love and emotions.”

Just like Choi, so many stars of art and writing admire moon jars.

But I’ve never really liked them. I don’t deny that moon jars have their own unique beauty, but it invites my resistance to limit Korean beauty to words used for describing moon jars - “modesty,” which de Botton mentioned, “freedom from avarice” as Choi put it, and “plain beauty” and “artless art,” which local art critics came up with.

Japanese art theorist and collector Muneyoshi Yanagi (1889-1961) originated the view that the major characteristics of Korean art are “beauty of whiteness,” “beauty of sorrow,” “non-artificial, natural beauty” and “unextraordinary beauty.” Quite a few Korean art historians and artists have been influence by Yanagi, whether directly or indirectly.

Nowadays, some criticize Yanagi for highlighting relatively unsophisticated or simple art from Korea, accusing him of diminishing Korea in accordance with the Japanese imperialist policy of his time.

But I don’t think Yanagi had ill intentions, as I believe he had socialist qualities and appreciated the craft of everyday objects created by anonymous people in Japan, too. He also founded the Mingei (folk art) Movement.

I just don’t agree with Yanagi’s view because I think the spectrum of Korean art and aesthetics is too broad to merely focus on simple and natural beauty.

Are Goryeo Buddhist paintings, known for luxurious gold pigments, elaborate details and mystic elegance, not Korean art? In that context, I felt sour about moon jars when I heard they were dubbed as “the essence of Korean beauty.”

However, I recently realized why moon jars are loved so much when I visited art exhibitions featuring moon jars or contemporary art inspired by the porcelain works.

Like other Koreans, I was under the collective depression in the aftermath of the tragic Sewol ferry disaster. And I was strangely comforted when I saw paintings by Kim and Kang depicting moon jars at the Seoul Museum in Buam-dong, hyper-realist paintings of moon jars by Ko Young-hoon in his solo show at Gana Art Center, and a group of Joseon-period moon jars in a white porcelain exhibition at Horim Museum of Art.

Their milk-white color and unsmooth texture made me feel warm, and their plump, round shape softened my mind.

Their “beauty with an empty mind,” as Choi described, helped me recover my own peace of mind.

I came to the thought that moon jars appeal, in particular, to depressed people as they are not visually gorgeous but are “not humble,” as de Botton said, and are “benign,” as Choi detailed. Perhaps that’s why Korean artists and critics in the mid-20th century loved moon jars so much, as there were so many difficulties during that era.

Now I see that de Botton’s selection of a moon jar for “Art as Therapy” is from his very sharp and delicate artistic sense.

I still think that the beauty of moon jars is only a part of the spectrum of Korean beauty. But I now praise the power of moon jars to comfort and heal people.