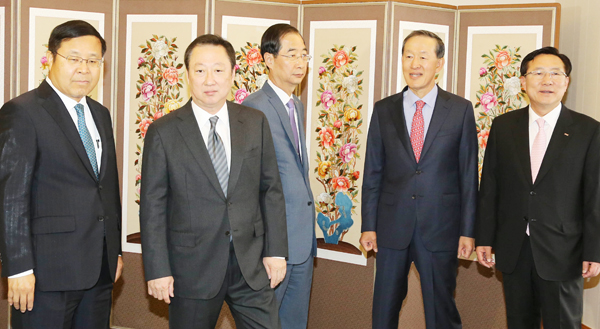 Leaders of Korea’s five major business lobbying groups met yesterday and decided to create a fund for victims and families of the Sewol ferry disaster and to help pay for the nation’s safety infrastructure.

The meeting was in response to President Park Geun-hye’s address to the nation Monday, during which she emphasized that the government will strictly monitor companies that try to profit by sacrificing people’s lives and property by “clawing back such greedy profits and closing them down.”

In 2010, the five lobbying groups donated a total of 45 billion won ($43.9 million) to the victims’ families of the Cheonan warship sinking.

The leaders agreed to expand investment in R&D and implementation of safety response systems and regular safety checks, as well as training and hiring more professionals at their member companies.

The lobbying groups also agreed to develop disaster response manuals customized to each industry and each type of workplace, and distribute them to members.

Industry insiders say conglomerates are well equipped with safety response systems and facilities, but the same is not true for small and midsize companies that account for almost 90 percent of the private sector.

“Businesses of fewer than 50 employees account for more than 80 percent of the nation’s industrial accidents. It is true that their employees are vulnerable,” said Lim Woo-taek, head of the industrial safety and health committee at the Korea Employers Federation. “Because many of them are the conglomerates’ suppliers, some conglomerates are helping the suppliers with building safety infrastructure and management programs.”