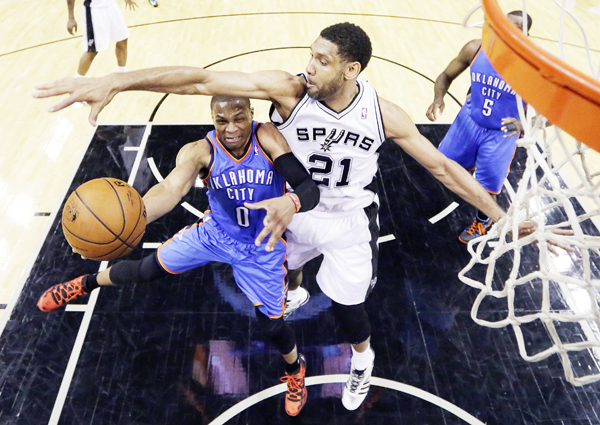 Oklahoma City’s Russell Westbrook (0) is defended by Tim Duncan (21) as he drives to the basket during the first half of Game 1 of the NBA Western Conference finals on Monday in San Antonio. [AP/NEWSIS]

Tim Duncan scored 27 points and the San Antonio Spurs took advantage of Serge Ibaka’s absence to dominate the paint, beating the Oklahoma City Thunder 122-105 on Monday night in the opener of the Western Conference finals.

Manu Ginobili added 18 points and Kawhi Leonard and Danny Green had 16 points each. Tony Parker did not appear limited by a hamstring injury, scoring 14 points and having 12 assists.

The Thunder struggled without the defensive presence of Ibaka, who will miss the remainder of the postseason after suffering a calf injury in the Thunder’s series clincher against the Los Angeles Clippers.

San Antonio had 66 points in the paint and shot 58 percent from the field.

The Spurs fed Duncan early with Ibaka out, and the veteran responded by scoring 12 points in the first quarter, making six of his seven shots.

The Spurs beat the Thunder for the first time this season, but it wasn’t easy despite Ibaka’s absence. Despite missing his first four shots, Westbrook continued to bull his way into the lane and it paid off as the game wore on.

Westbrook had 12 points in the third quarter, continually driving past Parker and the Spurs before they could settle in defensively.

With the exception of a pair of free throws by Derek Fisher, Westbrook and Durant scored all of Oklahoma City’s points in a 23-22 third quarter.

The extended efforts exerted by the Thunder’s two All-Stars eventually took a toll, especially with the Spurs bench coming to life. Westbrook and Durant were limited to seven points in the final quarter.

Spurs forward Aron Baynes entered with 2:43 remaining in the third and had an immediate impact. His 6-foot-10, 260-pound presence halted Westbrook’s drive in mid-dribble, creating a turnover and he also later forced a miss by altering Reggie Jackson’s short jumper.

Ginobili closed the quarter with a pair of driving layups to extend San Antonio’s lead to 89-82.

San Antonio scored the first six points of the fourth, including Leonard’s drive down the lane where he spun away from Durant and split two defenders for a layup on the opposite of the rim.

Leonard later stole an over-the-shoulder pass to Durant on a Westbrook, sprinting down the court and dribbling around Fisher and Jackson for a layup and a 106-93 lead.