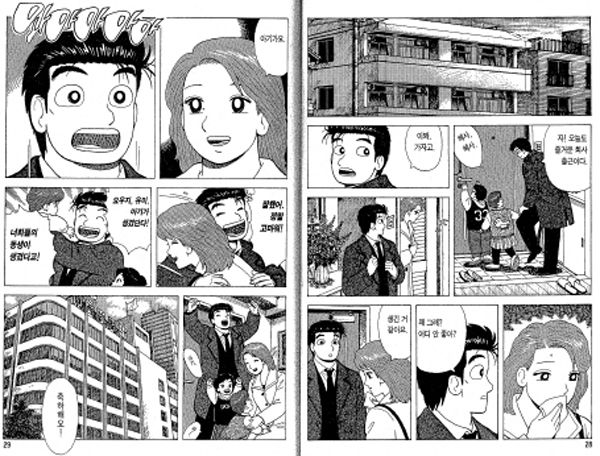 “Japanese Kaiseki cuisine focuses on highlighting the taste of each ingredient, except for a few specialized dishes. It is like a piano solo. However, Korean cuisine uses various ingredients for one dish to create a complex taste. It is more like a piano quintet or concerto.”

Volume 22 of “Oishinbo,” or “The Gourmet,” written by Tetsu Karia and drawn by Akira Hanasaki, compares Korean and Japanese cuisine in this succinct way. When I first read the Japanese comic book 15 years ago, I couldn’t agree more with the insightful comparison. The series is based on the research of two Tozai News journalists into Japanese and global countries’ culinary cultures for the “Ultimate Menu” project. It has been published in the weekly manga magazine “Big Comic Spirits” for 31 years since 1983, and more than 100 million copies of its 110-volume series have been sold worldwide.

“Oishinbo” is not a mere comic book about food but a chronicle of social and cultural history through cuisine. It does not make the exaggerated descriptions that are often found in food-themed comic books, such as depicting the ocean when writing about sushi. Instead, it offers detailed knowledge on the history of food and ingredients, and the mastership of Japanese dishes based on old documents and statistics, in the West as well as the East. It discussed issues such as the importing of rice, whaling and food additives, and whipped up debate.

The comics are at the center of controversy once again. The latest issue, “The Truth of Fukushima,” depicts the protagonist having a nosebleed during a visit to a village near the Fukushima nuclear power plant. The former chief of the village tells him his “nosebleed is due to exposure to radiation.”

Tetsu Karia, the comic’s author, said he was only reporting facts based on two years of research. But Fukushima Prefecture and the Japanese government criticized him, saying his work is misleading. The magazine mentioned the contentious issue in its May 19 edition and announced that the series has been suspended indefinitely.

In the “Truth of Fukushima Part I”, in the 110th volume of “Oishinbo,” which has already been published in Korean, the author asks whether the Japanese are deceived by “the people who don’t want the truth be known, those who want to trick everything and the media that promotes lies.” Aside from the scientific correlation between radiation and nosebleeds, we need to pay attention to the author’s question. After all, international change begins when someone asks for an answer.

*The author is a culture and sports writer of the JoongAng Ilbo.