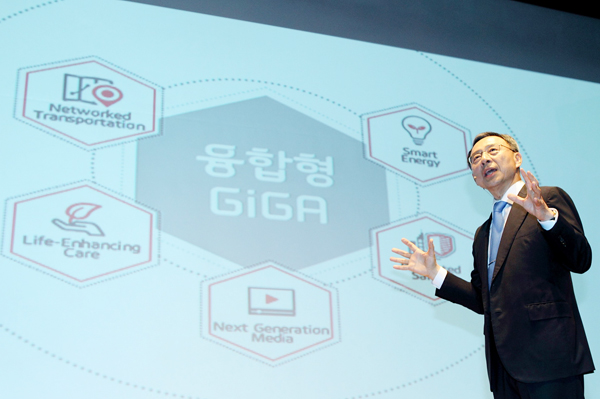 Hwang Chang-gyu held his first press conference since becoming chairman of the nation’s second-largest mobile carrier five months ago to trumpet Giga Internet as KT’s next big move in the mobile communications market.

During the event yesterday at KT Olleh Square in Gwanghwamun, central Seoul, Hwang admitted there have been a number of problems at KT due to poor management, but said employees’ passion may help the company become Korea’s No. 1 operator.

Giga Internet is 10 times faster than the current Internet. Hwang said KT is determined to use it to lead the mobile and landline telecommunications markets.

‘Gigatopia’ refers to the world connected to the Giga Internet. KT is set to invest 4.5 trillion won ($4.4 billion) over the next three years to build an integrated Giga infrastructure of wired and wireless networks.

“By opening up the Giga generation and leading the convergence of information and communications technology and other industries, we plan to boost the morale of Korean society as well,” he said.

Based on such a network, KT will commercialize UHD internet protocol television (IPTV) this year.

It will introduce Olleh Power Live, the world’s first concurrent video transmission technology that shows sports events and other TV shows with 10 times clearer pictures than those of digital multimedia broadcasting, in areas such as City Hall Plaza and Gangnam Station, by next month.

It plans to install Olleh Power Live at major subway stations in Seoul by the end of the year.

For the five future convergence services KT has chosen on the Gigabit network, it plans to cooperate with Korea’s small and medium companies to boost the ICT ecosystem.

Its smart energy service will be able to reduce energy consumption by more than 15 percent, according to the company.

KT recently concluded a memorandum of understanding with Korea Electric Power for cooperation in intelligent energy.

For its next-generation media business, it plans to globalize Korean content by developing new media technology and developing future content such as holograms.

In order to foster the health care business, it announced a plan to develop personalized treatment technology.

The company recently decided to build a bioinformatics center with Seoul National University for joint research.

Through its intelligent traffic control service, the chairman said, it hopes to take the lead in advancing logistics and reducing congestion.

Digieco, KT’s economic research institute, forecast that if KT’s plans are realized, they will create 37,000 ICT-related jobs and generate 9.3 trillion in economic activity.