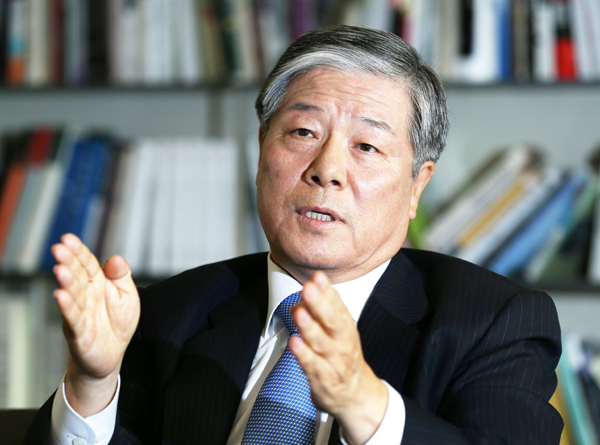 Korea’s National Intelligence Service came under fire once again earlier this year when an investigation revealed that three spy agency officials who worked for the Korean Consulate General in Shenyang, China - including an undercover agent - fabricated three documents concerning the immigration records of Yu Wu-seong, a Korean-Chinese man accused of espionage for North Korea, in an appeals case. The agents were indicted last month.

NIS Chief Nam Jae-joon and President Park Geun-hye promptly apologized for the scandal, but the rulings nevertheless elicited strong reactions from lawmakers, many of whom claimed the administration had been too accommodating toward the nation’s top spy agency. Other politicians demanded that Nam resign and called for the NIS to be overhauled.

Following the indictments, the JoongAng Ilbo sat down with Kim Sung-ho, the former director of the National Intelligence Service (NIS), who served from March 2008 to February 2009 under the Lee Myung-bak administration, on April 30, to hear what he has to say about the issues surrounding the NIS and how it should reform.

The 64-year-old currently works as the director of the Happy World Foundation. The following is an edited excerpt from the interview:

Q. The NIS seems to be at the center of controversy these days with so many ongoing issues. What is all the commotion about?

A. The director’s dogmatic leadership has surely taken its toll, and I also think the agency’s vices have had a part in it as well. Problems can no longer merely be solved by upper authority. Circumstances have changed now. The world of intelligence is like thin ice covered with scams and falsity, and with the lack of keen investigation, the NIS will be bogged down in a quagmire.

The fabrication scandal was an utterly criminal act, but Chief Nam concluded the case with just an apology. Shouldn’t he have stepped down from his post?

There are two divisions in the NIS: domestic and overseas. When dealing with enemy countries, it’s sometimes inevitable to break the law, and when this occurs, the public should be kind enough to turn a blind eye. But things are different on domestic occasions. The NIS should abide by the law, and the top leader must always be prepared to take responsibility. If not, the problem just won’t be solved.

During a special lecture you presented to Saenuri Party lawmakers, you seemed to have defended the NIS on their fabrication scandal by saying, “Their excessively strong patriotism might have triggered the move.”

I must have thought that the country would collapse if [the NIS] couldn’t prove a spy suspect guilty. People who work for the NIS have a sort of patriotism like no other. Early on, they’re trained to develop a firm work ethic - so firm that they would even sacrifice their very lives for the country.

Wouldn’t that be fidelity toward their affiliation?

If they really had the NIS in mind, they would have stopped midway because in the end, it became a huge blow to the organization. Their agents’ real names and their cooperator’s testimony all surfaced during the investigation. And because of this, the anti-North Korea espionage department was exposed and the NIS became a mess.

The fabrication of evidence is clearly against the law. Shouldn’t NIS officials have stopped?

Yes. In my case, I pulled the red card on many such cases [during my tenure], and I just had to helplessly watch terror suspects get away and industrial information flood overseas. There was no other choice because [at that time, the NIS legally] couldn’t find evidence. [It is cases like these that] need institutional support.

What kind of institutional support?

It’s crucial to enable the NIS to correctly do their job [by laying out favorable work conditions]. Solid foundations like institutional strategies and legal policies are necessary.

Can you provide an example?

With the current system, [the NIS] can’t tap mobile phones even with an issued warrant from the court because there are no legal grounds to request assistance from telecommunications companies. Only call records are provided for wireless communications. Because the NIS cannot tap phones, there were numerous cases in which we couldn’t catch terrorists and spies.

I heard the NIS uses a movable wiretapping device.

They were all removed after the NIS wiretapping scandal during the Kim Dae-jung government. Korea is the only country in which its intelligence service can’t tap mobile phones; the United States, Germany, England, Israel and everywhere else, it is allowed. Osama bin Laden was caught by wiretapping. Even if we have a spy suspect on the loose, it’s hard to collect evidence because [the NIS] can’t wiretap.

Is a relevant bill currently proposed in the National Assembly?

Of course. But the Assembly is hesitant to pass it because of arguments that it might violate human rights.

[The NIS] would have to have an issued warrant from the court. I don’t think it could be misused or violate human rights.

The crux of all the issues surrounding the NIS is the need for political neutrality.

It is already legally protected. [The law stipulates that if NIS officials get involved in politics], they will be sentenced to up to seven years in prison. The statute of limitations is a decade, and if things get worse, they may be removed from their post, which means they would not receive their pension. Internal and external sources can report on the agency, too.

Would the laws prove efficient in an organization that follows a strict hierarchy?

The very existence of a whistle-blowing policy profoundly pressures those in command.

It’s impossible to [openly] mention political intervention. Things have changed. Everything gets revealed [sooner or later].

The president and the director of the NIS seem to think that the agency can reform by itself. Is that possible?

The National Assembly can’t take full claim over the reformation process because its key principle is openness, whereas the NIS is confidentiality and subsidiarity.

The agency would lose all meaning if some outer force interfered. Both elements should be properly mixed: [The NIS] should be open to external intervention over matters it can’t solve by itself, but work on its own when capable.

Some argue that the anti-Communism investigation rights, which belong to the NIS, should be transferred to the Prosecutors’ Office.

The Prosecutors’ Office is responsible for legal actions, not catching spies. A spy case could possibly last several decades, and it’s inefficient for prosecutors who switch positions every year or two to cover such operations.