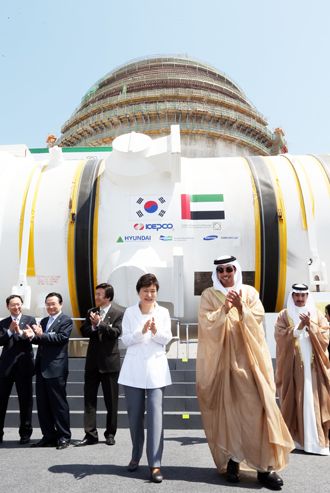 President Park Geun-hye yesterday attended an event celebrating the installation of a made-in-Korea nuclear reactor in the United Arab Emirates, which marked the debut of Korean nuclear reactors in the global market.

Code-named APR 1400, the reactor was developed and built in Korea. The installation of the reactor means “the technologies and safety of Korean-made nuclear reactors have been recognized by the world,” said the Blue House in a statement.

It also described the event as a “symbol of collaboration between Korea and the UAE.”

The president embarked on a three-day trip to the Emirates Monday afternoon after delivering an address to the nation in regard to the Sewol ferry disaster. She had originally been scheduled to visit the UAE and two other Arabic nations, Kuwait and Saudi Arabia, from May 17 but cancelled the trip in the wake of the tragedy. She decided at the last minute to attend the event in the UAE because of its economic and diplomatic importance.

“Korea has a number of orders from the UAE that are very significant business-wise,” said presidential spokesman Min Kyung-wook in a briefing. “The UAE government is especially concerned with the installation event and was very keen to see President Park there.”

The two countries began diplomatic ties in 1975 and the relationship gained momentum in December 2009 when a consortium led by the state-run Korea Electric Power Corporation (Kepco) won a landmark $20 billion deal to build four 1,400-megawatt nuclear reactors there by 2020. Korea has developed and produced four nuclear power reactors. The first three - Shin Gori-3, Shin Gori-4 and Shin Hanul 1 - have been put into operation locally.

The reactor Barakah 1, which weighs 533 tons, departed via ship from Masan Port in South Gyeongsang on March 17 and arrived on April 30 at Barakah, a coastal city 250 kilometers (155 miles) west of Abu Dhabi, the capital of the Emirates. Upon arrival, it passed two rounds of safety inspection by a group of multinational experts at the UAE’s Federal Authority for Nuclear Regulation on April 30 and May 18.

The Blue House says the reactor has been designed to withstand earthquakes of up to a magnitude 7 on the Richter scale and to remain operational for at least 60 years.

On the occasion of Park’s trip, the two countries signed three memoranda of understanding that are hoped to contribute to creating jobs for Korea’s younger generation. The first confirmed that 1,500 workers from the Korea Hydro & Nuclear Power and Kepco will be sent for operation and maintenance of the reactor.

Under the second, the Emirate Nuclear Energy Corporation (ENEC) will directly employ 10 university graduates in Korea every year starting next February and guarantee them at least five years of employment there.

In the third, the ENEC and Korea’s nuclear energy-related public companies will provide internships for 30 university students from each other countries for eight weeks. Recruiting will begin in June and the first batch of Korean interns will be sent to the Abu Dhabi-based ENEC next February at the latest.

Park’s visit to the UAE is also expected to expand business between the two countries into medical services, finance and information technology.

Following a luncheon hosted by Sheikh Mohammed bin Zayed al Nahyan, crown prince of Abu Dhabi, Park paid a visit to the Ahk unit in Al Ain, 165 kilometers from the capital, where Korean troops were deployed in January 2011 for military cooperation activities. This was the first time the president, who is in her second year in office, has cheered up Korean soldiers deployed overseas. She is set to return to Seoul today.