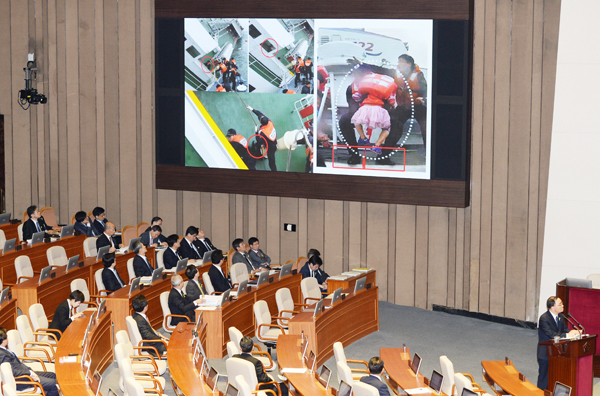 Lawmakers examine photos yesterday on the screen inside the main conference hall of the National Assembly of the Coast Guard’s rescue operations in the early stages of the ferry Sewol disaster. [NEWS1]

The ruling and opposition parties launched a two-day special parliamentary inquiry yesterday into the sinking of the Sewol ferry disaster, calling in outgoing Prime Minister Chung Hong-won and cabinet members to the National Assembly to shed light on what led to the government’s poor handling of rescue operations and the exact cause of the accident.

Reflecting on the widespread public disappointment in the government’s response to the sinking, the Saenuri Party and the opposition New Politics Alliance for Democracy (NPAD) lashed out at the government and the Coast Guard and demanded those responsible for the sinking be held strictly accountable.

More than 300 people died in the accident on April 16, when the ferry began to aggressively list and eventually capsized en route to Jeju Island from Incheon.

The ship was carrying 476 passengers, mostly high school students on a class trip, and authorities failed to save any survivors following the first day of the incident, the worst maritime disaster in Korean history.

The opposition continued its drumbeat of criticism, particularly on President Park Geun-hye’s surprise decision to dismantle the Korea Coast Guard for its bungling of the rescue mission. NPAD lawmakers called the move “surprise therapy” and said it was merely the president’s way of diverting attention away from the mistakes of her administration and placing direct blame on Coast Guard officials.

“If the government dismantles the Coast Guard and transfers [its functions] to the envisioned national safety agency, will it automatically create a rescue organization [to replace the Coast Guard]?” NPAD Representative Kim Choon-jin asked during the inquiry with Prime Minster Chung.

The NPAD’s criticism of the president’s decision to disband the Coast Guard was in line with the concerns expressed by family members of the Sewol victims, who worried that it could hamper search operations led by the embattled Coast Guard for the remains of those still missing.

He also noted the government had already given up on rescuing passengers trapped inside the ferry after the first day and claimed that the Coast Guard did not prepare supplementary oxygen tanks for divers in the event that they found survivors inside the sunken ship.

“It is the responsibility of the state to save and rescue its people,” Kim said. “And our government walked away from that responsibility.”

Saenuri lawmakers also launched an offensive on cabinet members, with some going so far as to demand a reshuffle in a rare display of bipartisanship.

Saenuri Representative Shin Sung-bum said the cabinet reshuffle would restore the public’s trust in the government.

“As the president said, the ultimate and definite responsibility lied with her. It is only right for all cabinet members to tender their resignations,” the lawmaker said, adding that a full reshuffle would demonstrate the “government’s commitment to reforming the country,” as the president pledged in her address Monday morning.

In response, Chung said that every cabinet member felt responsibility for the failed rescue mission and that no one would insist on staying in his or her ministerial posts.

“But I want to ask for assistance in concluding the search efforts [before the reshuffle],” the outgoing prime minister said.

Chung will step down once the government’s search efforts are completed.

The country’s worst maritime disaster is on the verge of becoming a political crisis for the Park government and the Saenuri.

Approval ratings for the president have fallen by nearly 20 percent since the Sewol ferry disaster, fueling fears within the ruling party that it may lose important races, including the Seoul mayoral race, to the opposition in the June 4 local elections.