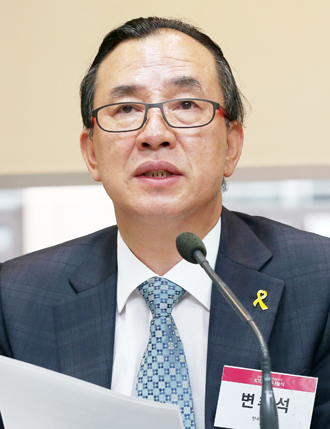 The Korea Tourism Organization announced its new vision and 10 goals with new President Byun Choo-suk at the helm yesterday at its headquarters in Jung District, central Seoul.

Though the 58-year-old took office early last month, it was his first public appearance as the head of the state-run organization, which promotes the country’s tourism industry.

Byun is the 23rd president of the KTO and succeeded Lee Charm, who stepped down from his post last November amid allegations that he visited a sexy massage parlor in Tokyo and received 750,000 won ($652) worth of services paid for by Japanese company officials.

“The KTO has achieved many things, such as a record-high number of foreign tourists,” Byun said.

“It is time to think about how to make a transition from quantity to quality,” he told reporters.

Byun pointed to three keywords - change, coexistence and communication - that were part of his new vision for the KTO and unveiled 10 detailed tasks toward achieving that.

The majority of those tasks are already under way, but those added under Byun reinforce travel safety, a decision that was prompted by the recent Sewol ferry tragedy.

“Safe travel has become an important issue,” Byun said. “We will soon launch a department dedicated to safe travel.

“I will refer to models in Australia [where tourists] frequently go on trips to the outback,” he added. “Safety education will target teachers and tour guides first, and there will be safety manuals for individual travelers, too.”

Byun previously worked in advertising before he was appointed as the president of the KTO.

He spent 18 years at advertising companies before moving to Kookmin University, where he served as a professor of visual design for another 15 years.

During the 2012 presidential election, Byun worked as the head of the media and public relations team and created an election logo used by the Park Geun-hye camp.

His appointment as president of the KTO stirred controversy because he did not have any experience in the tourism industry.

“It may look like I’ve had nothing to do with tourism,” Byun told reporters, “But I have closely worked with clients from the tourism industry.

“It is time to create new values by incorporating many different kinds of work, and tourism is no exception.”

Byun’s term at the KTO will last for three years.