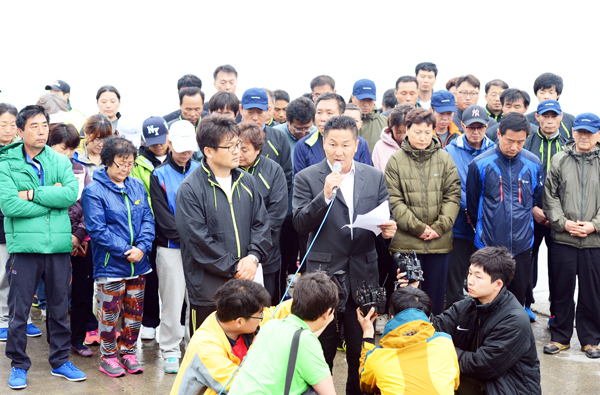 At a press meeting at Paengmok Harbor, in Jindo, representatives for the families of the victims of the Sewol ferry disaster yesterday demand the government make efforts to find the bodies of the passengers still trapped inside the ship. [NEWS1]

The bereaved families of the victims of the Sewol ferry tragedy called upon President Park Geun-hye yesterday to do her best to finish the search for all of the missing passengers before undertaking any of the other measures she mentioned Monday in her nationally televised address.

Representatives for the families held a press meeting yesterday at Paengmok Harbor, in Jindo, South Jeolla, to present their official response to the president’s speech, in which she pledged a full-scale administrative reform and disbanded the Korea Coast Guard in the wake of the sinking.

Despite the president’s shocking decision to dissolve the 61-year-old organization, the families expressed concerns, citing that she never promised in her address to locate the 17 bodies still trapped inside the ship.

“In her speech, we could not find a single word saying the 17 remaining missing are also the people of the Republic of Korea,” they said in a joint statement. “At the meeting with her [on Friday] in the Blue House, our biggest demand was [to conclude] search operations for the missing people.”

“We hope the government will make all-out efforts to search for the missing until the very last person is found,” they said.

When it came to the president’s promise to discover the truth for the reasons behind the sinking, the families said the rescue operations for the missing should be the government’s first priority. They also worried about Park’s plan to disband the Coast Guard while that mission is still ongoing.

“Without exception, please encourage the Coast Guard and private-military joint search team to find all of the missing people and return them to the arms of their families,” they said.

Divers and the Coast Guard failed yesterday to locate bodies due to aggressive waves. They found the remains of a missing female passenger Monday evening.

The young woman was identified as one of the four missing teachers from Danwon High School, who was leading about 200 high school students on a class field trip to the resort island of Jeju when the accident occurred. According to the Gyeonggi Provincial Office of Education, the teacher, 25-year-old Jeon Su-yeong, was found on the fourth deck without a life jacket.

She was allegedly on the fifth deck when the ferry started to list to the side.

However, she apparently went down to the fourth deck to attempt to rescue her students, the majority of whom were gathered there.

During her last phone conversation with her mother, she said, “The students wore life jackets. I should hang up the phone to talk to their parents.”