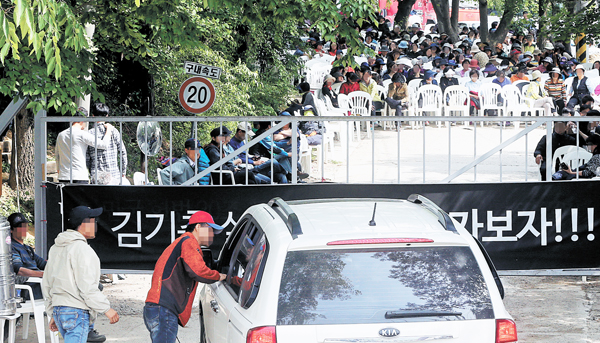 Adherents of the Evangelical Baptist Church yesterday continue to barricade themselves at the main entrance to Geumsuwon, a religious retreat in Anseong, Gyeonggi, where Yoo Byung-eun was believed to have been staying. By Kim Sang-seon

Prosecutors’ efforts to pursue the de facto owner of the operator of the Sewol ferry ran into yet another roadblock yesterday after Yoo Byung-eun snubbed a summons to appear in a court session to review the validity of arrest warrants.

Yoo, 73-year-old patriarch of the family that controls the Chonghaejin Marine Company, was ordered to appear at the Incheon District Court yesterday at 3 p.m. but didn’t show up.

The prosecution requested pretrial detention warrants for the absconding tycoon last Friday over corruption and mismanagement allegations, saying Yoo could flee or destroy evidence. Earlier that day, he ignored a prosecution summons for questioning.

The prosecutors initially considered forcing their way into a religious complex where they believed Yoo and his elder son were hiding. Geumsuwon, the religious retreat in Anseong, Gyeonggi, is dedicated to serving members of a Christian sect led by Yoo.

Authorities later withdrew the plan, saying that Yoo had already escaped the place.

“We were tipped off that Yoo got out of the place on Saturday,” said Prosecutor Kim Hoe-jong of the Incheon District Prosecutors’ Office.

“Based on phone records and other reports, we are pretty convinced that he is not there,” Kim told reporters.

The sect’s adherents vowed to block police from entering, accusing them of religious persecution in advance.

Kim suggested that Yoo may be hiding in the residence of one of the adherents.

“Still, we are not sure whether the house is in Seoul or not,” he said, “but we will try our best anyway to take him into custody.”

Also evading investigation are Yoo’s elder daughter Som-na and two sons - Hyeok-gi and Dae-gyun. Hyeok-gi is believed to be in the United States and Som-na in Paris. Investigators have submitted criminal extradition requests from U.S. and French agencies. The Ministry of Justice asked Interpol to arrest those in overseas countries.

Prosecutors allege that the elder Yoo was involved in the operator’s unsafe business practices, such as the overloading of the ferry and remodeling it to squeeze in more passengers and cargo.

The investigation into the family’s businesses and assets could also be relevant to the compensation for the families of the victims of the April 16 ferry capsizing that left more than 300 dead or missing.

So far, the government has used public funds to support the families of the dead or missing and conduct rescue operations. But it plans to charge expenses to the operator of the ferry through an indemnity suit.

As part of the investigators’ bid to apply pressure to Yoo, prosecutors sought the seizure of property worth 20 billion won ($19.5 million) in cooperation with the National Tax Service on Monday. The Seoul Central District Court accepted the forfeit request yesterday. The assets consist of eight buildings and plots of land in the affluent Gangnam and Seocho districts of Seoul.

It remains unclear whether the assets can be used for compensation and damages in the maritime calamity since the seizure is linked to a tax evasion charge.

In order for the government to allocate assets for compensation, prosecutors will have to prove that Yoo’s alleged mismanagement contributed to the disaster.

Yoo and his family are estimated to own up to 500 billion won in assets such as stock and real estate in foreign countries, including five mansions or luxury apartments in the United States. The figure includes estimates of assets held under fake names.

However, when counting indirect damages - such as the area affected by the oil leaking from the Sewol and the negative impact on tourism - the damages could balloon to 1 trillion won, lawyers specializing in marine disasters said.

The government vowed to hold the operator and its owning family liable. President Park Geun-hye said in a public address Monday that a special law will be introduced to go after the concealed assets of the family.

“The government would not let the families suffer again while they seek to get compensation from those corrupt companies and criminals,” the president said.

Prosecutors have had trouble proving Yoo’s involvement in Chonghaejin because he doesn’t hold an official position at the company and doesn’t own any of its shares. But prosecutors managed to find evidence suggesting Yoo was the company’s manager.

Earlier this month, prosecutors obtained an internal organization chart naming Yoo as president of the company after raiding the offices of Chonghaejin and its affiliates.

They also found that Chonghaejin issued a company ID number for Yoo and discovered a pay stub that records payments of 10 million won monthly over more than a year.