Park In-bee gets back in the swing

Park In-bee gets back in the swing 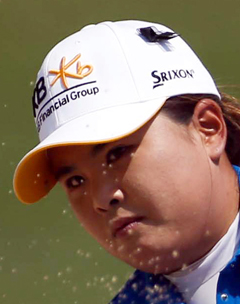 World No. 1 Park In-bee is returning to the LPGA Tour after missing three weeks because of food poisoning in the hopes of picking up her first win of the season and defending her top ranking.

The 26-year-old Park, who has been on the top of the LPGA for 58 weeks, will compete in the Airbus LPGA Classic presented by JTBC.

The tournament will be held Thursday to Sunday local time at the Robert Trent Jones Golf Trail at Magnolia Grove in Mobile, Alabama.

She was the runner-up in the Honda LPGA Thailand in February and finished third in the Lotte Championship in April.

Stacy Lewis of the United States is only 0.38 points behind Park, who has earned a total of 9.95 points so far this season.

Lewis picked up her first victory of the season in the North Texas Shootout presented by JTBC that ended May 5 and finished eight of her last 10 tournaments in the top 10.

Along with Park, other Korean sensations such as Park Hee-young, Choi Na-yeon, Ryu So-yeon and Pak Se-ri, the 2010 event winner, will compete in the Airbus LPGA Classic.

In addition to Lewis, who won the 2012 event and finished ninth last year, the Koreans will be challenged by Americans Jennifer Johnson, last year’s champion, Paula Creamer and Lexi Thompson.

Korean golfers have dominated LPGA tournaments in recent years, with the largest number of golfers finishing in the top 10 of tournaments.

But Americans have been setting the pace this season by winning six of 11 LPGA tournaments and placing six players in the top 12, including Lewis (second), Thompson (sixth), Creamer (ninth), Lizette Salas (10th), Cristie Kerr (11th) and Michelle Wie (12th).

J-Golf, a golf channel of the JoongAng Media Network, will broadcast the entire event live.