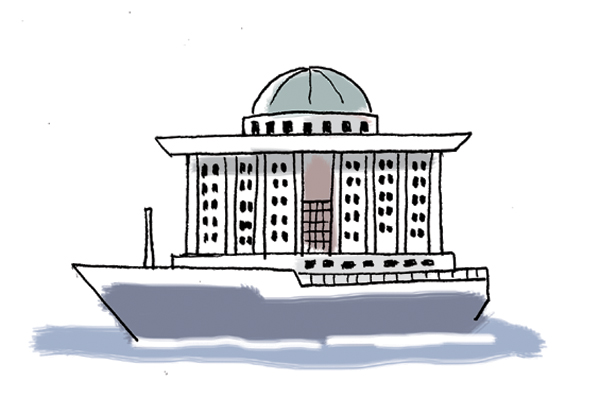 Thick fog fell on the Jayuro II Highway from Paju to Seoul. It was around 8:30 a.m. and on the radio, familiar music began to play. The slow and sorrowful melody of piano and violin was Arvo Part’s “Spiegel im Spiegel.” It matched the scenery out of my window that morning, and I sent the music to some of my friends by smartphone. It was the morning of April 16. I thought the music was perfect for the foggy weather. In fact, it was a prelude to tragedy as the news of the Sewol ferry’s capsizing started coming through. Coincidentally, Arvo Part is from Estonia, and the Sewol tragedy reminded me instantly of the sinking of the MS Estonia 20 years ago, costing 852 lives.

From now on, whenever I hear that music, I will feel guilty for my life surviving unchanged that day. A retired public servant recently told me, “It’s getting very awkward because I become tearful when I see young students on the street or bus.” He has never felt ashamed in the past to receive his pension payments. He does now. We can’t even imagine how devastated the families of those victims must feel, the mothers in particular. Every citizen of the Republic of Korea has a hole in his or her heart.

Considering the magnitude of the shock, President Park Geun-hye’s statement on Monday didn’t seem enough. She was emotional and sincere, but her solutions seem doubtful after 34 days, especially the plans to close, divide and merge government agencies. Not every speedy decision is half-baked, but an administration-driven national reorganization is unlikely to go as far as it claims. Sincerity does not guarantee success. Politicians and civil society must work together. While the Sewol ferry went under the waves at a truly terrible cost, we cannot let the Republic of Korea capsize as well.

The World Economic Forum published its Global Risk 2013 report, evaluating crisis management abilities by ranking 139 countries for their resilience. Among the developed economies, Singapore was ranked at the top, followed by the United Arab Emirates, Canada, Sweden, New Zealand and Finland. Hong Kong was in 15th place, the United States at 29th and Korea at 41st. Interestingly, Japan ranked at 67th place despite its reputation for disaster preparedness. Yoichi Funabashi, chairman of the Rebuild Japan Initiative Foundation and a former editor-in-chief of the Asahi Shimbun, said that Japan’s national competitiveness is high but resilience is low because it got poor marks for the management skills of its politicians.

In March, 2013, the Rebuild Japan Initiative, a think tank led by Funabashi, published “Japan’s Worst-case Scenarios: The Nine Blind Spots” on nine possible national crises including a clash with China over the Senkaku/Diaoyu Islands, a crash in treasury bonds, cyber terror attacks and a major earthquake in the capital region. Officials, field specialists and former and current politicians participated in the study. The report proposes the establishment of the Japanese equivalent of a National Security Council and legislation of a Special Secrecy Law. It is noteworthy that the Shinzo Abe government is putting some of the suggestions into practice. Recently, Tokyo decided to station Self-Defense Forces near the disputed Senkaku/Diaoyu Islands, a move that is mentioned in the report. “Reestablishment of crisis management governance is a job for the politicians. The government cannot be in charge,” Funabashi said. Politicians need to be responsible for designing a system to prevent the worst case scenarios from happening in reality.

Five elements of resilience named in the World Economic Forum reports are: robustness against risk; redundancy of infrastructure and strategy; social and human resourcefulness; immediate response capacity; and recovery to the routine. Is Korea equipped with these qualities? The Sewol tragedy is not some strange global risk but more of a conventional disaster. We can’t count on bureaucrats to reform themselves. The president’s instruction will result in a great fuss for a while, but little more. That’s where politics should come in. The cooperation of the National Assembly is necessary for many of President Park’s plans, so the time has come for the politicians to display their patriotism. Korea’s resilience is facing a test.

*The author is the CEO of JoongAng Books.