May 30: The Plaza Hotel Seoul hosts “Rainbow Bridge Story” by Steve Barakatt, a world-famous master of New Age music, on its top floor, Xystum House. In conjunction, VIP tickets to the concert will be offered to two couples through a lucky draw event running until tomorrow.

Steve Barakatt is an internationally prominent New Age pianist, and his hit piano music such as “Rainbow Bridge,” “The Whistler’s Song,” “Flying” and “Day By Day” has featured in various TV advertising, dramas and movies. An after-party and a photo event will be also organized after the concert, where the audience can enjoy time with Barakatt with a glass of wine.

Guests can apply for the lucky draw event until tomorrow by sending an email to party@hoteltheplaza.com with a love-themed story or message related to family, lovers or friends. Two couples will be offered free VIP concert tickets.

The winners will be announced on Monday. The hotel also presents a Steve Barakatt room package for May 30. The package includes one night in a deluxe room and two VIP tickets to the Steve Barakatt concert. The package price is 500,000 won including taxes and service charges. 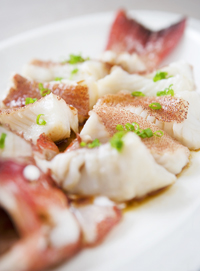 The well-designed menus feature steamed grouper balls, stir-fried lobster with asparagus and lily, baked Alaskan crab legs with broth, noodles mixed with scallion and mushroom, and sea-cucumber soup. Set menus No. 1 and No. 2 are priced at 228,000 won and 288,000 won each. Chef Ku’s signature dishes are also available as a special feature on the a la carte menu.

On June 19 at 7 p.m., Chef Ku will present a one-off dinner showcase, accompanied by his explanations. Guests will also be offered the chance to sample five varieties of premium Shui Jing Fang baijiu liquor, the ideal accompaniment to Chef Ku’s cuisine. The special guest chef dinner is priced at 288,000 won per person including taxes and service charges.

Ongoing: Lotte Hotel Seoul’s Pierre Gagnaire a Seoul, the only restaurant run by a three-Michelin-starred chef in Korea, presents a one-hour express lunch course for busy businessmen. The Taste of Pierre Gagnaire menu will be available throughout the year. The lunch course is tailored for business meetings and allows busy people to get a taste of authentic French dining.

The three-course meal is composed of amuse-bouche (bite-sized hors d’oeuvre), a main dish and a dessert. The amuse-bouche will be a unique and creative combination of gorgonzola pear ice-cream and granite made with celery and green mango.

It costs 85,000 won for the seafood course and 121,000 for the meat course. You can also add 16,000 won for a glass of red or white wine recommended by the sommeliers. Prices include taxes and service charges.

June 16 to Sept. 5: The Grand Hilton Seoul is presenting a “summer package.” The first includes an overnight stay at the Grand Hilton with two cups of iced coffee, a Hilton tumbler, tickets to the Daelim Museum ‘Troika’ exhibition and a bookmark. The package is priced from 182,000 won to 350,000 won. The price varies depending on room type.

The second summer set, designed only for female guests, includes a one night’s stay in a suite accommodating up to six people. Since the suite is spacious, guests are able to throw a party and enjoy red wine, simple snacks and a cheese plate. The package starts from 199,000 won. For the first 10 people who book the lady’s package, a complimentary class on flower arrangement will be given. Guests have to pay for the flowers and other material costs, though.

A package for families is also available, which includes a one night’s stay in a suite accommodating up to four people, a Hilton tumbler and an ice cream voucher. The package starts from 205,000 won.