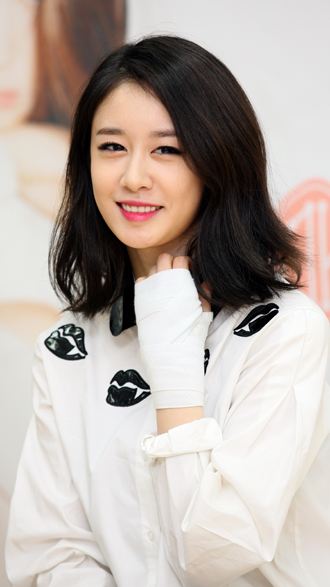 Park Ji-yeon’s music video for the track “1 Min 1 Sec” has sparked controversy online for the singer’s sudden transition from a dainty T-ara member to an alluring woman. The song is from her first solo album “Never Ever,” released Tuesday.

Park may be the youngest among the group’s six members, but her strong presence in T-ara seemed enough to qualify her as the first to launch a solo career. The 20-year-old didn’t seem nervous or under pressure about taking the stage without the support of her band.

“The title of ‘T-ara’s first solo’ was tempting,” Park told local reporters during a press conference Monday at her practice room in Nonhyeon-dong, southern Seoul. “I put a lot of effort into the album and practiced very hard to show that I am enjoying myself on stage.”

Q. What has changed from when you acted together as a T-ara member?

A. The song, choreography and the overall mood are all different. I thought a lot about showing a feminine and masculine side at the same time. I think it will show on stage. I really want to hear that I have improved a lot from when I was in T-ara.

How much did you participate in shaping the album?

From the styling to the dance moves, I took part in every stage. When I was preparing for T-ara’s performances, we just practiced what the choreographer told us to, but this time I even participated in suggesting the key concept of my stage setup.

How much of your suggestions were implemented into your new album?

Roughly about 30 percent of my ideas were reflected in the album. My boss and I had very different ideas about it so we went though endless meetings and discussions. What I wanted was to show a masculine side, while my boss wanted me to be just sexy. The result slanted more toward his ideas, but, luckily, I am happy with it.

Female singers like Jeon Hyo-sung from Secret and G.Na recently returned to the music scene with songs from hitmaker Double Sidekick, who produced your lead track. How will you outdo them?

Nothing comes to mind right now. I just think that doing my best is the most important thing. I am hoping for a “win-win” situation rather than a fierce competition. Also, if you look closely, our styles all differ from each other.

Who do you think stands out as a sexy female singer these days?

There are so many unique female singers these days. For example, Kim Hyun-A from 4Minute is effortlessly sexy. Her presence itself is the quintessence of sexiness, while Lee Sun-mi [a former member of Wonder Girls] has a very dreamy aura.

I want to be the kind of a singer who is also accepted by female fans. Male fans recognize sex appeal by how much skin and provocative moves we show on stage, but it’s different with female fans.