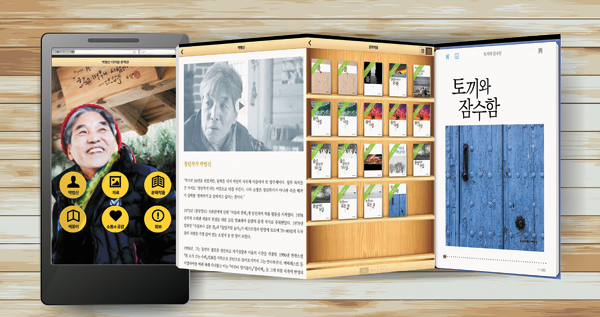 Novelist Park Bum-shin went back to his hometown of Nonsan, South Chungcheong, three years ago. He found a small house to write in near Tapjeong Lake.

After publishing his 39th full-length book, “Eun-gyo,” which was adapted into a movie of the same title in 2012, the novelist unexpectedly left Seoul and returned to his hometown to “write in solitude, away from the public.”

After about two years of seclusion, the writer published his 40th full-length novel, “Salt,” and last month released his 41st, “Trivial Landscape.”

Shortly after publishing the short story “Remains of the Summer,” in 1973, Park won the JoongAng Ilbo’s annual spring literary contest and jumped into churning out creative work. Within four years, Park had managed to publish four full-length books.

The author’s latest work is even more unconventional than “Eun-gyo,” the 2010 novel that deals with an 80-something poet falling for a teenage girl. “Trivial Landscape” shows a seditious love between a man and woman, which is depicted “more shockingly,” according to Park, but is told poetically.

Although he is 68 and has penned 41 books, Park seems to know how to attract young Korean readers. The established writer has created a smartphone app with the help of the Nonsan city government and Chungnam Culture Technology Industry Agency. The app, called Park Bum-shin’s Digital Literary House,” contains 19 of Park’s novels. Among them, 14 must be paid for while five are provided for free.

The app is currently being tested and will be available within this month. Its launch marks the first time a living novelist has created an app named after himself.

“I don’t really know how to use a computer or tech gadgets,” said Park. “But I will make sure I learn it properly so I can communicate with readers through this app.”

“I will not compromise with anybody on my novels, but when it comes to communicating with readers, I think diversity is better,” Park explained. “I also think it can serve as an example to young novelists. Moreover, nothing will give me more pleasure if this communication with readers through the app contributes to local society.”

Park said that people thinking of Seoul as the only cultural hub in Korea is only relevant in an offline world.

“I believe Nonsan can also be a hub of culture,” said Park, adding that there are no boundaries to cultural hubs when it comes to being connected online.

When the Chungnam Culture Technology Industry Agency dropped in to suggest the creation of the app, he said he accepted the proposal “without hesitation.”

And although Park humbles himself by saying he is computer illiterate, the author has already been a front-runner in terms of digital publishing.

Park was the first writer in Korea who serially published a novel, “Cholatse,” on Naver, the country’s largest Internet portal. “Eun-gyo” was also published in hard copy and as an e-book at the same time, breaking a custom in the country’s publishing industry.

The JoongAng Ilbo recently visited Park’s “writing home” to hear about his new book and app. When asked about his abrupt decision to move to Nonsan, Park said he did so because “the Nonsan city mayor, who is in his 40s, called me ‘hyungnim’ and suggested I come to Nonsan.”

Hyungnim, is a Korean word younger use as a respectful term for older men.

“When you think about Nonsan, the first image that comes into your mind is the training camp for the Korean Army. I thought it would be good to add another image. People can think, ‘oh, it’s where that novelist lives.’ I thought it will make me feel worthwhile that I’ve decided to return to my hometown.”

“Absolute poverty” was the atmosphere of Park’s childhood in Nonsan, he said. But his love toward the area is apparent in that many of Park’s novels are set in the city. His short story “Nonsan-daek” is a tale about life in the slums around Nonsan Training Camp, while his 2011 novel “My Hand Turns into a Horseshoe” is based in Ganggyeong, also in Nonsan. His 40th book, “Salt,” is set there, too.

Park described the app as a “gift from my hometown.” He said he hopes more visitors will come to Nonsan after communicating with readers through the app. When reporters ask him for an interview, he often asks them to “come to Nonsan.”

In the aftermath of the Sewol ferry disaster, Park said he was “overtaken by weariness for quite some time.”

“I thought about how pointless writing more novels would be,” confessed Park.

But in the end, Park said he realized that what he could do best is “to write until the last day of [his] life.”

“That’s what my hometown has called for me to do and is what I can do for it,” said Park.

Chungnam Culture Technology Industry Agency was working on a project based on South Chungcheong’s existing historical figures. For this, they received recommendations from the province’s 15 cities and counties. Nonsan’s authorities suggested popular novelist Park, who has a wide range of readers. They chose the author because he is still actively engaged in creative writing, especially stories that are set in Nonsan.

Park took the two bodies up on the offer as he trusted the will of Nonsan city government and the planning ability of Chungnam Culture Technology Industry Agency. The organization said they wanted to create a new liberal arts platform for writers fused with communication forms that break away from “simply accumulating content on Internet homepages.”

As much of Park’s work has been adapted into television dramas, plays or movies, the agency judged that Park’s content would be competitive enough to allow him to have an app under his name.

Park Bum-shin Digital Literary House offers 19 of Park books. Some of the earlier works are considered especially valuable as they are out of print and it’s nearly impossible to get them offline.

The app also includes free videos of Park discussing his stories and of tourist attractions in Nonsan. It will contain academic material such as reviews from critics and the history of literature research. Users can also view documentaries about Park and links to films and television dramas that are based on the author’s literature, as well as interviews he did with media outlets.

When new books are published, the app will be updated.

Chungnam Culture Technology Industry Agency said it is planning to promote the Park Bum-shin Digital Literary House app to libraries and education facilities throughout the country.

Moreover, it will try to discover other masters like Park, as well as tourist attractions of South Chungcheong, to create more apps to secure a nationwide content network.

According to the agency, Park Bum-shin Literary House was designed to be optimized in a mobile environment, in a “distinctively different” way to the e-book content market.

Critics say the probability of failing to develop regional cultural content through a writer is quite high when approaching the task as if creating just another piece of software.

In order to be successful in such a fast-changing, fast-consuming atmosphere, content needs to continuously attract people’s interest. It becomes more difficult to secure intrigue in terms of content for digital literary houses, though, because readers may view them only as monumental achievements created for writers posthumously.

In this respect, critics say Park’s digital literary house has introduced a new paradigm. Such an example will provide more opportunities to young writers while active writers can own their own literary house without spending a fortune.

Moreover, the future of such a digital literary house is seen as a bright spot as “it can also introduce tourist attractions in the region,” luring not only interested readers but also people who may want to travel in the area.

But critics also pointed out that if the content is not competitive enough, “it’s sure to fail.”

Oh Cha-seok, an application developer and the director of M-Solution, said, “For mobile apps or social network services, content competitiveness is the key that divides success or failure,” and added, “on the surface, it looks like applications or SNS have expandability, but in reality, they don’t.”

Hwang Yoon-ah from the Chungnam Culture Technology Industry Agency countered, “Starting with Park Bum-shin Digital Literary House, we plan to discover more historical figures or masters in their own fields like Park and turn it into cultural content that has a popular appeal and consistently provide information service to the public.”

Oh explained, however, that since “novelist Park has been working actively for the past 40 years, securing a large fan base, he already has a community dedicated for him.”

He continued, “it will be important to examine whether the historical figure or a tourist attraction has their own community formed to be competitive enough.”