A wireless train that runs on magnetic technology travels along a 150-meter (492-feet) stretch of railroad in Uiwang, Gyeonggi, yesterday. The train was developed by the Korea Railroad Research Institute. The institute plans to commercialize the technology in five years. Provided by the institute

A locally developed wireless bullet train that runs without electric cords and instead uses magnetic technology was successfully test-driven Tuesday.

Although the technology is used in other types of vehicles, yesterday was the first time the wireless technology has been used to power a bullet train.

The Korea Railroad Research Institute tested the train on Tuesday on a 150-meter (492-feet) stretch of railway it built in Uiwang, Gyeonggi. The test moved the train at three to four kilometers per hour.

“The institute aims to start commercializing the wireless power technology on light rails in next five years,” said Lee Jun-ho, a senior researcher at the institute. “We will keep researching to advance the technology to make it applicable to subways and bullet trains like KTX.”

So far, only electric vehicles and light-rail trams are successfully using the technology, and unlike the new bullet train, they require batteries that must be charged. These vehicles also have less electricity capacity. 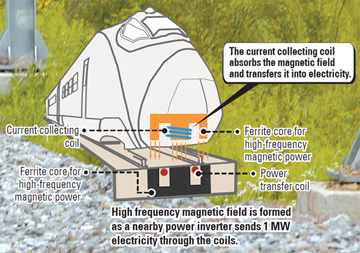 Electric buses have a capacity of about 100 kilowatts and trams have 180 kilowatts. Bombardier, a Canadian train manufacturer, tested a light-rail tram network with the wireless battery technology in Augsburg in 2012. Korea has been using electric buses since last year in Gumi, North Gyeongsang, with locally developed wireless power-transfer technology created by the Korea Advanced Institute of Science and Technology and the rail institute.

But for the train, the Korean power-transfer technology carries and transfers a high volume of electricity, up to one megawatt, which is about 10 times that of electric buses and light rail trains. The train generates its own electricity as it runs.

The power-transfer facility in the track can also carry 300 kilowatts, about 3.3 times more electricity than the coils used for light-rail trams.

However, more tests must be done before the new bullet trains can be commercialized.

To power bullet trains at faster than 400 kilometers per hour, the power-transfer facility must have a capacity of about nine megawatts. Lee, the lead researcher of the project for the railway institute, said that his team will continue developing the coils so that they can receive and transfer larger amounts of electricity.

High-speed trains like KTX were able received their huge amounts of power though electric cords hanging above the trains like a spiderweb. Without the cords, the businesses running the trains can save up to 52 percent of operating cost in maintenance.