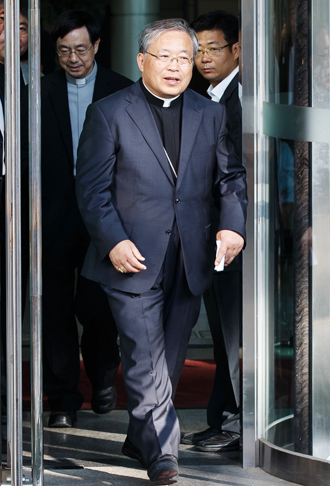 Cardinal Andrew Yeom Soo-jung comes back from his visit to the Kaesong Industrial Complex yesterday. [NEWS1]

Cardinal Andrew Yeom Soo-jung paid a surprise visit to the Kaesong Industrial Complex in North Korea yesterday, Seoul officials said, but the church denied it had anything to do with Pope Francis’s trip to Korea in August.

The newly elected cardinal said he decided to visit the cross-border industrial park to meet with a group of South Korean Catholic workers and officials working there and see how they are doing in the wake of the bitter shutdown of the complex last year.

“Today, by visiting the Kaesong Industrial Complex, where both the South and North are cooperating together, I saw a hope of overcoming the pain and sadness [of the division of the peninsula],” Yeom said in a brief address to the press at the Dorasan Customs, Immigration and Quarantine Office in the border city of Paju, South Korea, after he and six other priests and a reporter from a Catholic newspaper returned to the South by cars. “I think peace could be established if we talk to people with good will,” he said, “and make sincere efforts.”

It was the first time a South Korean cardinal visited the complex.

Heo Yeong-yeop, a South Korean priest who accompanied Yeom, denied news reports that Yeom’s surprise visit to North Korea may be a precursor to a similar visit by Pope Francis in August. “This has nothing to do with the visit of the pope,” Heo said. “There was no contact with North Korean officials. As the visit was aimed at encouraging workers in the complex, we did not hold a Mass. It was just a private visit to keep a promise to the Rosario group.”

The Rosario group is a private group of Catholic South Korean workers and businessmen in the complex.

Heo said the Catholic workers visited Yeom in August 2013, when the complex was closed due to strained inter-Korean relations, and asked him to pray for its reopening. Yeom accepted their request and promised to visit the complex after it was reopened.

According to Yeom and the Ministry of Unification, which is in charge of approving visits to the North, the cardinal requested a visit to the complex last Christmas Day. But the plan was scrapped, reportedly after being rejected by North Korea due to the political turmoil caused by the execution of Jang Song-thaek, uncle and former political protector of leader Kim Jong-un. The surprise visit by the cardinal was arranged without telling reporters in advance as per a request by North Korea, the Ministry of Unification’s deputy spokeswoman Park Soo-jin said at a briefing yesterday.