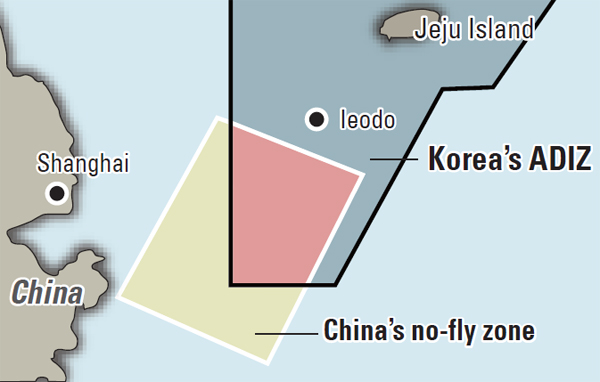 According to the Korean Ministry of National Defense on Tuesday, the training area for the military exercises conducted by Beijing and Moscow partly overlapped with the Korean and Japanese ADIZs. Seoul was barely given any prior notice.

A no-fly zone declared by China for the joint maritime drill with Russia intruded 230 kilometers (142 miles) northward into the Kadiz and 172 kilometers eastward, according to a Korean military official.

Defense Ministry spokesman Kim Min-seok said that in a response, Korea stepped up surveillance and reconnaissance activities in the part of its air defense zone area in which China and Russia were conducting military exercises.

He did not specify whether any Russian or Chinese aircraft or ships actually crossed into Korea’s ADIZ.

This is the first time Beijing carried out such military drills in the region since Korea expanded its ADIZ last December.

Last November, China proclaimed a new air defense identification zone in the East China Sea that overlaps Korea’s and Japan’s at points where the countries have disputes over claims, such as Ieodo, underwater reefs that belong in waters that both Seoul and Beijing claim. The sudden and unilateral announcement raised fears of heightened geo-political tension in the region.

Korea responded by expanding its own ADIZ in December to incorporate waters surrounding its remote islands, including Ieodo.

China unilaterally announced a no-fly zone on its government website Friday in preparation for the China-Russia naval drill, four days before it started.

The Defense Ministry summoned a defense official from the Chinese Embassy in Seoul Tuesday and warned Beijing to inform Korea of future military drills that will overlap its Kadiz.

Russia and China’s weeklong naval cooperation drills involving submarines, warships, fighter jets and combat helicopters run until Monday. This is the third such joint naval exercise, but the first to be held in the sensitive East China Sea. The drill coincided with Russian President Vladimir Putin’s visit to China. Putin launched the military exercise with President Xi Jinping on Tuesday.

Spokesman Kim said the Defense Ministry will “utilize communication hotlines set up between the navies and air forces of the two countries to ensure the safety of civilian aircraft and vessels and prevent any accidental clashes between military aircraft.”

Russian aircraft have violated the Kadiz before, and defense officials here did not confirm if these aircraft were a part of the China-Russia naval drills.

Some countries require aircraft that enter the zones to provide identification and flight plans, but usually only if they are headed to a destination in that country, not if they’re just passing through.

Seoul doesn’t want to rile relations with Beijing ahead of a visit by President Xi to Korea expected next month.

A government official who requested anonymity pointed out, “China’s drill is an act aimed at the U.S. and Japan, thus there is no need to build tension between Korea and China.”