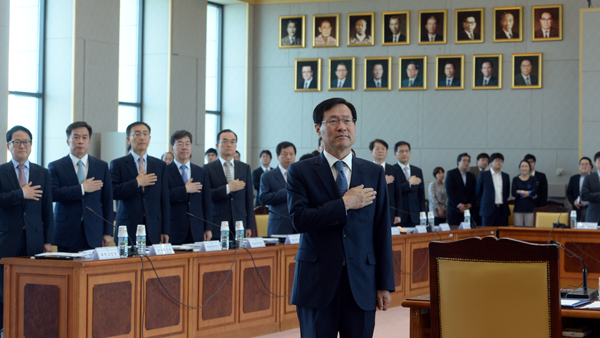 Prosecutor-General Kim Jin-tae presides over a meeting with chief prosecutors from district prosecutors’ offices around the country yesterday in the Supreme Public Prosecutors’ Office in Seocho District, southern Seoul. [NEWSIS]

Senior prosecutors from around the country vowed yesterday that they will punish public officials found giving undue favors to businesses using their regulatory power, sending a strong message to the public sector that they intend to earnestly deal with systemic corruption.

“We need to seriously consider how collusive ties and irregular practices are hampering state affairs,” said Prosecutor-General Kim Jin-tae, who led an emergency meeting yesterday at the Supreme Prosecutors’ Office in the presence of more than 30 senior prosecutors.

“By mobilizing our investigative capabilities on this urgent task, we urge you to eradicate the cause of such irregularities and change the perception among government officials [when it comes to collusive ties] to make the public safer,” he added.

Since the Sewol ferry disaster, President Park Geun-hye has emphasized rooting out “bureaucratic mafia” culture, commonly known as “gwanfia,” a term that refers to the corrupt connections between industries and the public officials who regulate them.

The word is a portmanteau of gwalyo, the Korean word for officials, and mafia.

Her remarks followed allegations that inappropriate connections between the Korea Shipping Association, a safety regulator, and Chonghaejin Marine Company, the Sewol ferry’s operator, enabled the ship to pass safety tests despite being overloaded.

Before sailing from Incheon en route to Jeju Island, the vessel was loaded with cargo weighing far more than its intended capacity.

The emergency meeting of senior prosecutors came just two days after the president pointed at the culture of widespread corruption as one of the main contributors to the disaster.

Officials said that to realize their commitment to eradicating graft in the public sector, they will set up a special investigation team dedicated solely to eliminating gwanfia culture at prosecutors’ offices nationwide.

The prosecutors’ initiative also comes amid growing public anger over corruption in all corners of society, particularly against the backdrop of the Sewol sinking, which left more than 300 people dead or missing when the ship abruptly started to list and eventually capsized in waters off the southwestern coast.

The ship was carrying 476 passengers, mostly high school students on a class trip, and authorities failed to save any survivors following the first day of the incident, the worst maritime disaster in Korean history.

In her nationally televised address on Monday, President Park announced a set of packages aimed at rooting out long-held dubious practices between government regulators and private businesses. Those plans include tripling the number of private institutions at which retired officials may not be rehired.

The move is intended to prevent conflicts of interest with their previous careers.