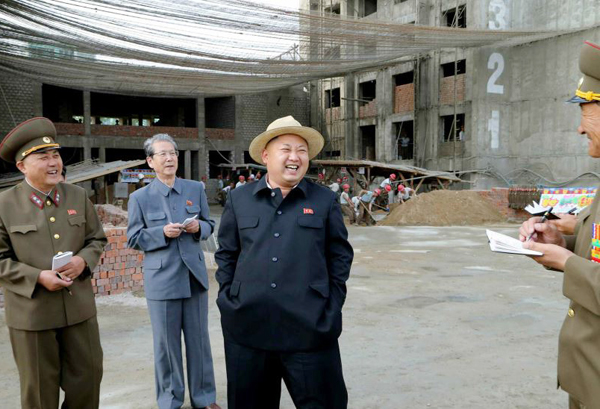 North Korean leader Kim Jong-un is still insisting on the speedy construction of a new residential apartment complex despite the deadly collapse of another high-rise building in Pyongyang, official outlets reported.

Kim’s visit came just a week after a 23-story building under construction collapsed on May 13 in Pyongchon District, in southern Pyongyang.

Although North Korean media did not disclose the number of casualties, South Korea’s Unification Ministry quoted sources saying there were 92 families allegedly living in the yet-to-be completed building.

At the time, sources speculated that the collapse could have been the result of Kim’s policy speeding up construction on projects, dubbed “Masikryong Speed,” a reference to the swift completion of the Masikryong Ski Resort in North Korea, which was allegedly hurried along with shoddy materials and workmanship.

But Kim urged workers to complete the construction of the faculty housing on the Taedong River by Oct. 10, the anniversary of the foundation of the ruling Workers’ Party.

Army unit no. 267 troops took part in the construction of those buildings, which were completed by Oct. 10, 2013 as encouraged by Kim, according to the KCNA. On Oct. 9, 2013, KCNA reported, Kim attended the completion ceremony with his wife Ri Sol-ju.

Apparently cognizant of last week’s collapse of the apartment building in Pyongyang, Kim encouraged soldiers to “firmly guarantee the safety of the building.”

The new residential complex for the Kim Chaek University teachers will be called the Street for Future Scientists, Kim said, according to KCNA.