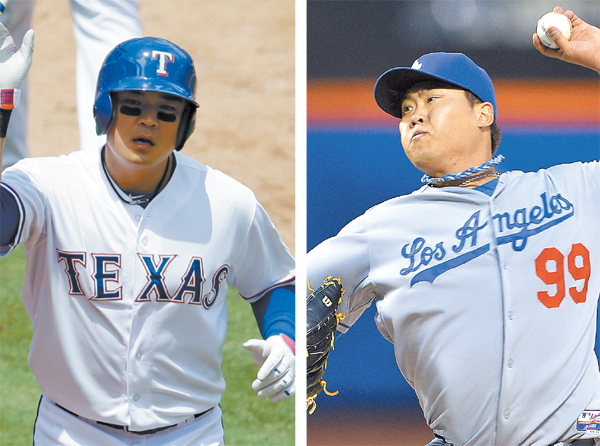 Left: Choo Shin-soo of the Texas Rangers crosses home plate after hitting his fifth homer of the season in the fifth inning Wednesday against the Seattle Mariners in Arlington, Texas. Right: Ryu Hyun-jin of the Los Angeles Dodgers returned from the disabled list to throw six strong innings against the N.Y. Mets for his fourth win.[AP/NEWSIS] [NEWS1]

Wednesday in the United States was a good day for Korean players in Major League Baseball and their fans.

Ryu Hyun-jin of the Los Angeles Dodgers picked up his fourth win of the season in his first start in nearly a month due to shoulder soreness.

The left-hander allowed two runs in six innings and struck out nine to lead the Dodgers to a 4-3 victory over the New York Mets.

In Arlington, Texas, Choo Shin-soo’s leadoff home run in the fifth inning was the difference in a 4-3 Rangers win over the Seattle Mariners.

Hundreds of Korean fans were at Citi Field in New York to see Ryu take the mound for the first time in 24 days, allowing two hits and striking out four in the first two innings. Ryu went on the 15-day disabled list April 28 with inflammation in his left shoulder.

With yesterday’s win, Ryu improved to 4-0 in five starts away from Dodger Stadium this season.

In the third inning, Ryu allowed two hits and a walk to load the bases with two out, but he struck Mets cleanup hitter Curtis Granderson to get out of the jam. He threw 50 pitches in the first three innings.

The highlight of Ryu’s day came in fourth, when he retired the Mets’ sixth, seventh and eighth hitters on only 10 pitches while striking out two.

The Dodgers took a 1-0 lead in the second inning on Adrian Gonzalez’s solo home run, his 12th, then added two more runs in the sixth on back-to-back solo home runs by Yasiel Puig and Hanley Ramirez.

In the bottom of the sixth, however, Ryu allowed a two-out home run to Eric Campbell with Granderson on first.

That ended Ryu’s streak of 33 straight scoreless innings on the road that began on Sept. 24, 2013, in San Francisco.

“I was faithful to my rehab and what the trainers told me. I felt good. I felt ready, mentally,’’ said Ryu. “I’m glad to be back and eager to get the team going in a winning direction.’’

The Dodgers added an insurance run in the eighth when the Mets blew a chance for an inning-ending double play.

Pinch-hitter Chone Figgins started the inning with a double off Mets reliever Jeurys Familia and scored on Ramirez’s comebacker with runners at the corners.

“He threw a ’pen [session] after 14 days and threw every pitch exactly where he wanted,” Mattingly said, according to MLB.com. “You get the feeling he’s always able to do that. He’s a guy who doesn’t throw much between starts, and he still has that touch.”

While Ryu proved he is healthy on the mound, Choo of the Rangers showed off his power in the batting box.

In the bottom of the fifth against the Mariners with the game tied 3-3, Choo crushed Chris Young’s 79-mile-per-hour slider over left center field fence (436 feet).

The home run was Choo’s fifth of the season, and he is hitting .310 with a .432 on-base percentage. In addition to the home run, Choo had a hit and was hit by a pitch for the seventh time this season.

Choo batted third in Rangers Manager Ron Washington’s lineup as Prince Fielder remained sidelined due to pain in his back and arms.