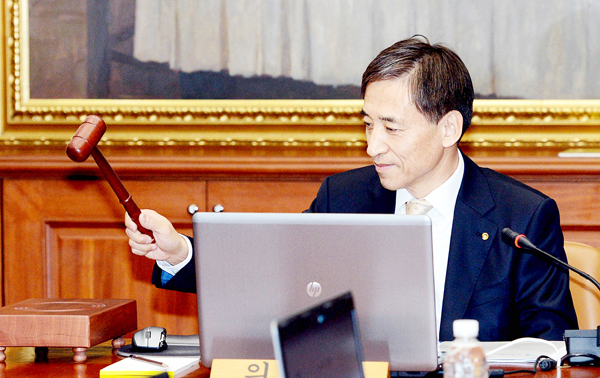 Bank of Korea Governor Lee Ju-yeol took office April 1 and the former senior deputy governor exercised his newfound power three days later. He dismissed five senior officials who had been loyal to his predecessor Kim Choong-soo. The move raised eyebrows and stirred controversy because the replacements took place outside the regular appointment calendar. Aides claimed the new governor’s action was not personal, but Lee confessed to reporters a few days later that he had to remove thorns in his fingers.

Then curious writing appeared on the bank’s internal electronic bulletin board. It quoted an ancient Chinese saying that if a someone loyal to a former king does not step down in time, he could end up in harm’s way.

The saying refers to the doomed Li Si, who had helped Qin Shi Huang unite the Qin state and served under the emperor as prime minister. He later betrayed Qin by conspiring with chief eunuch Zhao Gao to forge the emperor’s will on the choice of a successor. After his power was safely secured, Zhao had Li executed.

Bank of Korea employees all recognized the writing as being aimed at Deputy Governor Park Won-shik and his assistants, who were dubbed the “people of Kim Choong-soo.” Many suspected the note relayed the thinking of the new bank chief.

They were correct, because Park earlier this month stepped down even though he had 11 months remaining in his term. Park officially “resigned,” but bank officials generally agree “dismissed” is the more accurate word. Just before he left office, he vehemently denied talk of him handing in his resignation.

But the following day, he left his workplace with a stern expression on his face, skipping his “retirement” ceremony. Deputy posts at the central bank are appointed by the president. Since deputy governors were made ex officio members of the monetary policy committee in 2003, none had left office without completing their term. As as senior deputy, Lee clashed with former Governor Kim, but nevertheless finished his term.

Deputy governors Kang Juno and Kang Tae-soo were rumored to be the next to go. The presidential office had to intervene to stop Lee’s purging campaign. One former central bank official observed that the new governor was just putting his house in order. The message he was sending was clear: The former governor came from another organization. Cooperating with an outsider is an act of betrayal, which would face strong punishment when a traditional central bank lineage returns to the helm. Lee in his confirmation hearing emphasized that he would be different from his predecessor and keep to principles on appointments. But his principle turned out to be the old boys’ network.

Kim had been criticized as thick and strong-willed, snubbing the Blue House’s cues on monetary policy and often ignoring the market. But during his four-year term he brought about meaningful reforms in the central bank. He pressured bank employees to research, produce dissertations and hold debates. He broke down barriers in appointments by promoting the bank’s first female deputy governor and borrowing expertise from economists and young talent. The conventional bank strongly resisted these changes, especially the foray into the exclusive bank by outsiders. But he silenced them by reasoning that the central bank belongs to the people, not Bank of Korea employees.

But now, the Bank of Korea is returning to its old tightly knit and closed ways. About 2,200 Bank of Korea employees earn a yearly 94 million won ($91,770) on average. Annual remuneration exceeds 100 million won from middle-rank. Jobs are secure until retirement, unless one falls out of favor with the executives. They are perfectly happy in the fiefdom and do not need any help or advice from outside. Anyone who cooperates with the government or outsiders is still stigmatized as a betrayer. It is why there are few complaints and protests about the recent extraordinary and suspicious purge of senior officials.

Despite its independent status, the Bank of Korea is a public entity in charge of interest rates, foreign exchange and price policy that affect the everyday lives of ordinary people. Bank of Korea employees are paid with the money printed under the authority bestowed by taxpayers. Even if the government goes bankrupt, the central bank would be able to support itself. Such authority and prerogative demands responsibility and professionalism.

We cannot expect public-oriented policies if bankers act like politicians fighting for their own interests and defending their constituency. What kind of leader encourages his men to turn back and go against the times? He makes us already miss the old guy.