Not your father’s frumpy family van

Not your father’s frumpy family van 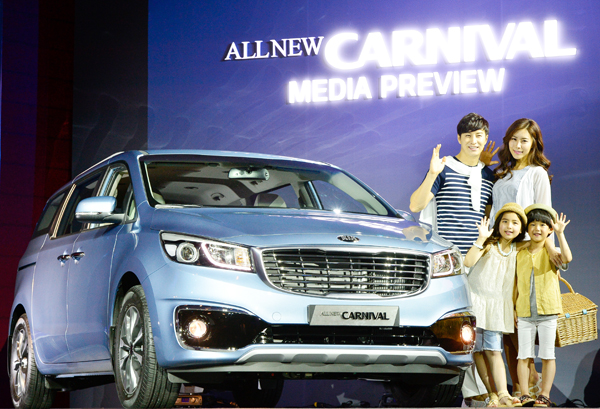 The new Kia Carnival is introduced yesterday at the Sheraton Grande Walkerhill Hotel in Gwangjin District, eastern Seoul. The third generation of Kia39s popular minivan got a snazzy makeover and comes with seating for nine or 11 people. [NEWS1]

Kia Motors unveiled its all-new Carnival yesterday with a fourth-row “pop-up sinking” seat as competition in the minivan market heats up.

The 2015 Carnival, which comes in nine-seat and 11-seat configurations, is the third generation of the model and the first full makeover since 2005. Under project name “YP,” Kia said it invested 350 billion won ($341 million) over 52 months in its development.

“We focused on space efficiency, passenger convenience and a premium image for this family van,” said Kia Motors President Lee Sam-woong at the launch at the Sheraton Grande Walkerhill Hotel in eastern Seoul. “Carnival is a minivan that focuses not on how many people it can seat, but on allowing consumers to express their lifestyle.”

Kia emphasized that the highlight of its new Carnival, known as Sedona overseas, is the “pop-up sinking” seats in the fourth row, which the company claims is a world first. Kia said the seat can be folded under the floor and pulled up using a strap.

The new Carnival is equipped with a R2.2 E-VGT diesel engine that satisfies Euro 6 emission regulations. Even though the weight of the vehicle has increased slightly because of the greater use of Advanced High Strength Steel, Kia said the new Carnival gets 5.5 percent better mileage at 11.5 kilometers per liter (27 miles per gallon).

The third generation also has spinoff models like the High Limousine with added luxury features and the Outdoor SE for leisure activities with factory-installed roof boxes.

The Carnival has been the leading minivan in Korea since it was introduced in 1998. However, domestic sales for the first four months of 2014 were only 5,671 units, down 43.8 percent from a year ago, which Kia attributed to buyers waiting for the new model.

The automaker hopes to sell 4,000 Carnivals a month and projects sales of 40,000 in Korea next year.

“Our target customers are fathers aged 35 to 44 with two or more children,” said Cho Yong-won who leads Kia’s Domestic Marketing Group. “The minivan market is about 66,000 units annually in Korea.”

Kia will release the model in the beginning of October in the United States and next year in other foreign markets, according to Lee Soon-Nam, vice president of Kia’s Overseas Marketing Group. In the United States, Kia will sell the Carnival with a 3.3-liter gasoline engine. All Carnivals are made in Korea.

Foreign brands also have been rushing to release minivans in recent years. “I don’t think there will be direct competition with imports because our product is a nine- or 11-seat model, while imports are seven or eight seats and the price difference is more than 15 million won,” said Kim Chang-sik, chief of Kia’s domestic sales division.