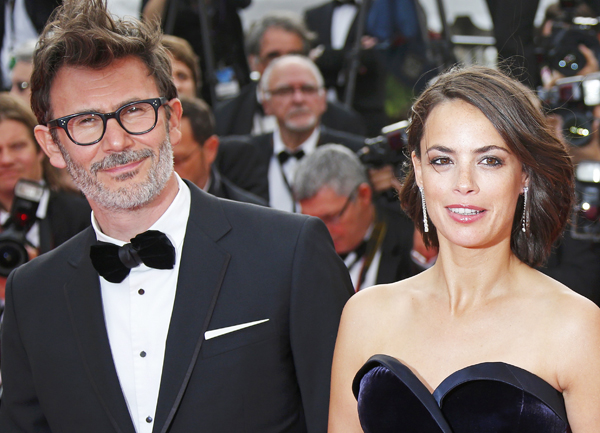 Director Michel Hazanavicius, left, and cast member Berenice Bejo pose on the red carpet as they arrive for the screening of the film “The Search” in competition at the 67th Cannes Film Festival in Cannes on Wednesday. [REUTERS/NEWS1]

CANNES - A powerful indictment of the 1999 Chechen war by “The Artist” director Michel Hazanavicius was booed and cheered at Cannes on Wednesday while France’s Jean-Luc Godard ventured into 3-D for his latest festival entry at the age of 83.

Hazanavicius’s “The Search” and Godard’s “Adieu au Langage” (“Goodbye to Language”) are two of the films by French directors competing in the world’s largest cinema showcase for the prestigious Palme d’Or prize, to be awarded on Saturday.

Fans of “The Artist,” an uplifting Hollywood fairy tale, will be in for a visceral shock with Hazanavicius’s latest.

“Welcome to this big shit-hole - Chechnya,” are the movie’s opening words, uttered by a Russian soldier videotaping scenes of burnt-out buildings, dead livestock and, later, the murder of villagers in a war seen by some as Russia’s Vietnam.

Chechnya fought a separatist war in 1994-96 briefly shaking off Russian rule, but lost the second in 1999-2000 when Russia’s then-prime minister, Vladimir Putin, re-established control over the region.

Hazanavicius cuts between two story lines to portray the war and the lives torn apart by it. In the main one, 9-year-old Hadji - played by Abdul-Khalim Mamatsuiev - flees his destroyed, abandoned village, his baby brother in tow, after his parents are killed by Russian soldiers.

He is discovered outside a refugee center by Carole (Berenice Bejo), a European Union human rights worker documenting abuses and struggling to galvanize public outrage to spur a strong response to the war from the West.

In the second strand, 19-year-old Kolia (Maxim Emelianov) is arrested for smoking pot and forced into the Russian army. He is seen going through a stomach-turning training process designed to prepare him psychologically to see Chechens as “terrorists.”

When he reaches the front, he loses no time in killing his first two “terrorists” - an old man and a boy.

“I think everyone knows the Russian army massacred hordes of people in Chechnya. It’s a historical fact,” Hazanavicius told journalists and critics at a press conference.

“The film is a political one, but I’ve tried to ensure it doesn’t take sides, ultimately,” said the director, adding that his interest was in showing “human beings subjected to war.”

“I’ve tried to focus on the human angle because that’s what interests me,” he said.

While the movie finds its emotional center in Hadji, the screenplay stumbles with its heavy-handed reproach of the West’s hands-off approach to the war, expressed by Carole in lines such as: “I’m sick of your indifference while people are dying.”

“Bejo’s considerable talent is squandered by treacly dialog,” IndieWire wrote. The Guardian cited “sincerity and commitment, and an earnest rejection of the horror of war” but criticized “sentimentality is at its core.”

Returning to Cannes is the acclaimed pioneer of the French New Wave, Godard, who has made almost 40 films. The enigmatic synopsis of his 3-D film, due to screen for journalists later on Wednesday, involved a married woman and a single man and a dog that weaves in and out of their lives.

Godard’s “Breathless” broke with the established conventions of French cinema in 1960 and helped kickstart a new way of filmmaking, complete with handheld camera work, jump cuts and existential dialog.

The director participated in one of Cannes’s most dramatic moments during the 1968 citizen uprisings throughout France. A sit-in at the main theater building by protesters including fellow directors Louis Malle and Francois Truffaut resulted in the festival being canceled.

While the festival, now in its 67th year, seeks to give a voice to directors old and new, some critics, including Scotland’s Richard Mowe, feel there hasn’t been enough variety.

“There are far too many familiar names who seem to be in there for no good reason than they are familiar names and have been to the festival many times before, not necessarily on merit,” Mowe, a juror for Director’s Week, told Reuters. “Thank God for the other sections in the festival which do get new blood.”