Korea and WFP turn page for new chapter on aid

Korea and WFP turn page for new chapter on aid 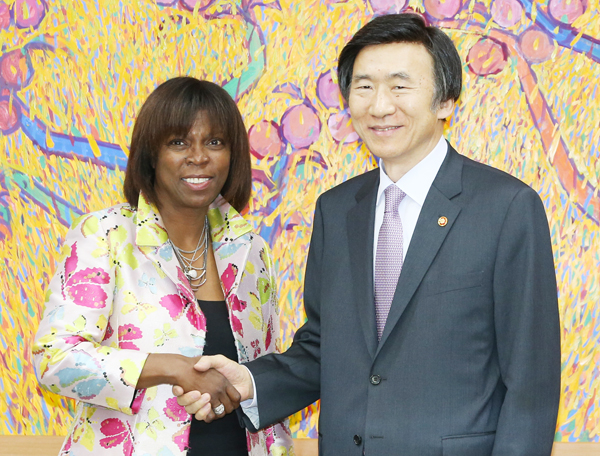 Almost half a century after becoming a recipient of aid from the United Nations World Food Programme (WFP), South Korea officially exited the program yesterday and started a new relationship with it as a donor.

The WFP, the world’s largest humanitarian organization that provides aid to over 80 countries, began providing food support to impoverished, war-torn Korea in 1964. Korea signed a basic agreement with the WFP in 1968 and received aid until 1984.

Korea long ago transitioned from a recipient to a donor nation, but that was only made official yesterday when WFP Executive Director Ertharin Cousin and Korean Minister of Foreign Affairs Yun Byung-se signed a Korea-WFP Partnership Framework Agreement.

The two initialed the agreement at a ceremony at the foreign ministry in central Seoul, terminating the 1968 basic agreement and signaling a new era of cooperation with the WFP.

“This is a milestone moment for the WFP and the relationship with the government of Korea,” Cousin told reporters after the signing, “because it formalizes a growing partnership between the two countries to ensure that not only do the hungry and chronically malnourished children in the world benefit from the investment of the government, but they benefit from the capacity of a government that has moved from a nation where people were hungry to now being a significant donor in the world to end hunger.”

This is the Rome-based Cousin’s first trip to Korea since she became executive director of the food agency in 2012. She is scheduled to be awarded an honorary degree from Ewha Womans University.

Earlier this week, she led a three-day WFP delegation to Pyongyang to review a food support program aimed at women and young children.

When asked about the food situation in North Korea, Cousin, ranked 49th on a Forbes magazine list of the world’s 100 most powerful women, said she only visited Pyongyang, where she “did not see a food shortage situation.”

But she emphasized that the WFP program in North Korea “is a malnutrition program primarily focusing on the first 1,000 days to ensure that we can eliminate the stunting that occurs both mentally and physically to children … our program there is critically underfunded and we are concerned about our ability to continue to operate if we don’t receive additional funding for that program.”

When asked what messages she received from the North Korean leadership on her visit, she said, “They took all of our suggestions under advisement, and we are hopeful that we will see the changes that are necessary to ensure that the donor community will provide us with the additional assistance required so that we can continue our efforts in the country.”

South Korea is slated to become an executive board member of the WFP in 2015, according to the Foreign Ministry.