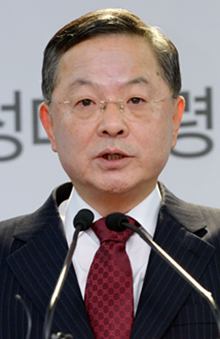 President Park Geun-hye has appointed Ahn Dae-hee, a former prosecutor and a Supreme Court justice who joined her presidential campaign in 2012, as Prime Minister to replace Chung Hong-won.

The Blue House also made a surprise announcement that the president accepted the resignation of Kim Jang-soo, chief of the National Security Council under the presidential office, and Nam Jae-joon, director of the National Intelligence Service, the nation’s top spy agency.
The measures are the first stage in a major administration housecleaning that Park vowed on Monday would “refurbish and rebuild” the nation in response to the tragic sinking of the Sewol ferry five weeks earlier.
The president approved the exit of Chung on April 27 amid national outrage over the government’s terrible handling of the accident and rescue efforts -- on the condition that the accident will be fully dealt with by him.
Ahn, Chung’s replacement, is expected to take office after June 10 given that confirmation hearings take at least two days. Chung will continue as acting prime minister until then.