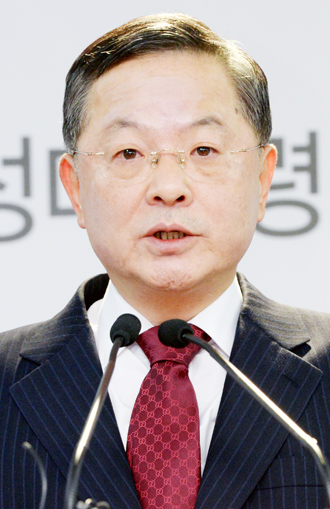 President Park Geun-hye yesterday appointed Ahn Dae-hee, a former prosecutor and justice of the Supreme Court of Korea who was active in her presidential campaign in 2012, as prime minister to replace Chung Hong-won.

The Blue House also made the surprise announcement that the president accepted the resignations of National Intelligence Service chief Nam Jae-joon and Kim Jang-soo, chief of the presidential office’s National Security Council.

The measures are the first stage of a major administration housecleaning that Park vowed on Monday would “refurbish and rebuild” the nation in response to the tragic sinking of the Sewol ferry five weeks earlier.

The president, facing the biggest crisis since she took office in February 2013, approved the departure of Chung on April 27 amid national outrage over the government’s terrible handling of the Sewol sinking on the condition that the accident would be fully dealt with by him.

“As President Park made clear in her address to the nation,” said presidential spokesman Min Kyung-wook in a briefing, “she has designated a new prime minister so she could eradicate the wrong practices in society and deep-rooted evils that surfaced in the wake of the Sewol accident, and proceed with a nationwide reform to create a new Republic of Korea.”

“[Ahn] is considered capable of successfully reforming the bureaucracy and government structure. President Park said the upcoming reshuffle of the cabinet will be based on proposals from the new prime minister,” Min said.

Two hours after the announcement, Ahn held a press conference at the government complex in Gwanghwamun, central Seoul.

“I have devoted my whole life to resolving the structural contradictions in society and wiping out corruption,” he said. “[President Park’s] entrusting of the prime minister post to me entitles me to clean out evils that have stacked up for decades and to carry forward a major overhaul,” he said.

Ahn is expected to take office after June 10 given that confirmation hearings can take place after the June 4 local elections. Chung will continue as prime minister until then.

Ahn was born in Haman, South Gyeongsang - the province from which most high-ranking government officials and conservative politicians in the Park administration come from - and his family moved to Seoul when he was a teenager.

He passed the national bar exam in 1980 at age 26 while he was still attending Seoul National University as a public administration major and became the youngest prosecutor in history at the time.

He served as chief of the central investigation department of the Supreme Prosecutors’ Office, which was once one of the most powerful government bodies.

His unrelenting probes into illegal presidential campaign funds raised by politicians of the Grand National Party, the predecessor of the Saenuri Party, and into conglomerates is credited for combating the mutual back-scratching practices of the government and big business.

His investigation tarnished the image of the GNP, but it led to the appointment of President Park, who was noted for her integrity, as chairwoman of the party in March 2004. She managed to conduct an extensive overhaul of the party and its success in the general election the same year Ahn transformed her into a strong presidential candidate for the future.

Ahn climbed further within the legal circles to become justice of the Supreme Court in July 2006 under the Roh Moo-hyun administration. He served for six years.

Right after wrapping up his term, Ahn joined the Saenuri as head of a special committee on political reform during the presidential campaign in 2012. He pulled away from the political scene after opposing Park’s designation of senior politician Han Gwang-ok as chairman of the Presidential Committee for National Cohesion. He opposed Han because of past corruption cases against him.

Meanwhile, Park basically fired the NIS and NSC chiefs, analysts said. NSC chief Kim has been under fire for claiming his council bore no responsibility for disaster control in the wake of the Sewol sinking. He said the National Security Council was in charge of security and safety issues.

The main opposition New Politics Alliance for Democracy has been demanding that NIS Director Nam, a 69-year-old former Army chief appointed in March last year, be sacked. The agency has been accused of interfering in the presidential campaign in 2012 by conducting an online smear campaign against Democratic Party candidate Moon Jae-in.

Most recently, the agency was embroiled in an unprecedented scandal involving allegations that its agents fabricated key evidence in a case charging a North Korean defector with espionage against the South.