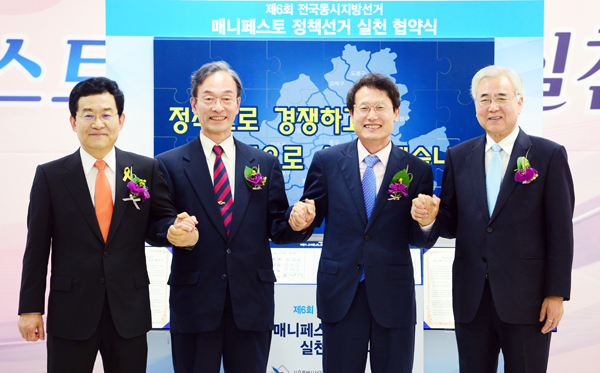 From left: Koh Seung-duk, Rhee Sang-myon, Cho Hi-yeon and Moon Yong-lin, the candidates running for superintendent of the Seoul Metropolitan Office of Education, attend a ceremony yesterday on providing a policy manifesto at the Seoul Election Commission in Jongno District, central Seoul. [NEWS1]

Koreans will head to the polls on June 4, but in addition to voting for their local representatives, they will also be deciding who will serve in 17 education superintendent posts over the next four years.

Among voters, superintendent candidates are generally lesser known, particularly next to the heavyweights running in gubernatorial and mayoral races nationwide. And given that those candidates don’t receive political party support like their local representative counterparts, top priority is placed on meeting as many constituents as possible and spreading their agendas.

Following the commencement of the official 13-day campaign yesterday, four candidates running for superintendent in the Seoul Metropolitan Office of Education, including incumbent Moon Yong-lin, took to the streets early yesterday morning in the capital.

Candidate Koh Seung-duk visited Noryangjin, in southern Seoul, a town famous for the large percentage of people who opt to take civil servant tests or other examinations. A number of renowned cram schools are located there.

“I came here to give hope to the youth who are working hard for their futures,” Koh said.

Moon, meanwhile, visited Gangnam Station in southern Seoul, as area packed with offices, to greet commuters. “Because the number of working couples is increasing, I wanted to say that [I’ll make sure] they don’t need to worry about sending their children to school,” he said.

Cho Hi-yeon, the sole progressive candidate, began his campaign visiting the memorial altar set up for the victims of the Sewol ferry disaster at City Hall Plaza in central Seoul. “I will not let students become preoccupied just with grades,” Cho said, “but I will have them learn what is most needed, such as safety education.”

The four candidates subsequently gathered for a debate at Jogye Temple in central Seoul, where they discussed a range of educational issues.

But despite their head start, the public has remained less interested in the superintendent races.

A recent poll by the JoongAng Ilbo showed that 52.9 percent of the 800 Seoul citizens surveyed were not supporting any superintendent candidate, or declined to comment on the race. The figure for those undecided or indifferent about the Seoul mayoral race, however, stood at just 14.5 percent.

Though the superintendent contenders remain little known, those who are elected will hold considerable sway, making decisions on education that could have a tremendous impact.

“The ultimate authority on organization, human resources and the budget resides with the education superintendents, not the education minister,” said Jeong Je-young, a professor at Ewha Womans University.

The superintendent of the Seoul Metropolitan Office of Education alone handles a 7.4 trillion won ($7.2 billion) annual budget and is charged with appointing 54,000 teachers to local schools. The entire education budget handled by all 17 local superintendents adds up to 52 trillion won.

“Because the Ministry of Education is responsible for handling an enormous budget, we should look at this from the perspective of students and parents,” said Kwon Dae-bong, an education professor at Korea University.

Those representatives are also responsible for dealing with educational policies that are applied to 6.5 million kindergarten, elementary, middle and high school students countrywide.

“Mayors or governors divide up the authority with local representatives elected by people, whereas superintendents may appoint representatives for local educational facilities,” said Cheong Jean-gon, an education professor at Hanyang University.

Analysts say voters should be more concerned, as the policies implemented by each candidate can vary greatly.

“The quality of education and school safety depend upon efficiency and transparency of the educational administration,” said Kim Jin-wu, the head of the Good Teacher Movement. “We should elect candidates who are willing to solve problems derived from educational bureaucracy.”