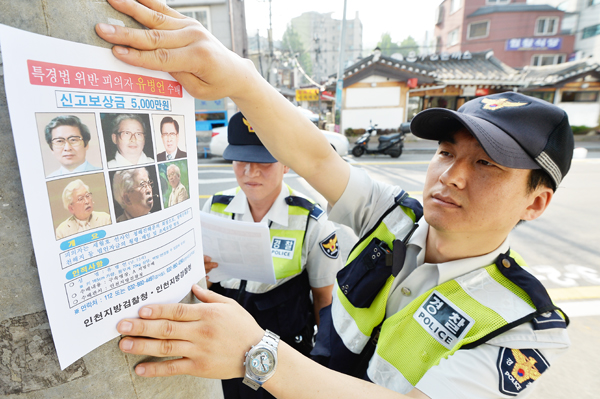 Investigators pursuing the family behind the company that owned the sunken ferry Sewol started tracking overseas properties held by the elusive older daughter and younger son of patriarch Yoo Byung-eun.

Second son Yoo Hyeok-gi is believed to live in the United States and Yoo Som-na, the oldest daughter, in Paris. They allegedly own upscale houses in New York, California and France.

If prosecutors prove that the son and daughter used illegally obtained money to purchase those assets, they will request U.S. and French law enforcement agencies to seize property and freeze bank accounts held by the son and daughter. Prosecutors sought arrest warrants for the two on charges of being involved in financial irregularities including embezzlement and tax evasion.

The Ministry of Justice dispatched local investigators to discuss potential extradition. Yoo Som-na is in France on a temporary residence visa.

Local prosecutors are laying the groundwork for grabbing those assets by discussing judicial assistance with the French government.

The Supreme Prosecutors’ Office has also asked the U.S. Homeland Security Investigations directorate to track down real estate and deposits under the names of the siblings or affiliates of the family business.

Yoo Som-na is believed to own and live in a luxury apartment near Paris’s Champs-Elysees. The apartment is reportedly worth 2.5 billion won ($2.44 million).

Yoo Hyeok-gi and his wife Elizabeth Yoo allegedly own at least three apartments in Manhattan and near the Arc de Triomphe in Paris estimated to be worth around $6.2 million altogether.

Prosecutors are trying to hold the family liable for damages incurred by the ferry disaster, which left more than 300 passengers - mostly students - dead or still unaccounted for.

The government has used public funds to assist the families of the dead or missing and carry out rescue operations.

But it wants to charge expenses to the owners of the operator of the ferry, the Chonghaejin Marine Company, through an indemnity suit with President Park Geun-hye vowing to introduce a special law to facilitate the possible forfeitures.

When counting indirect damages, the figure could balloon up to 1 trillion won, lawyers specializing in marine disasters said.

Aside from the two siblings abroad, the family’s patriarch and his eldest son Yoo Dae-gyun also continue to evade arrest and are assumed to be in Korea.

Arrest warrants are usually valid for one week, but the warrant for the elder Yoo will last until July 22.

“Yoo is concluded to have fled, and there is a high probability that he may destroy evidence,” Judge Choi U-ho of the Incheon District Court said while issuing the warrant.

Yoo had earlier snubbed prosecution summons and failed to appear at a court hearing to review the validity of arrest warrants.

The elder Yoo and his son are charged with tax evasion, embezzlement and negligence of duty, and prosecutors allege that the misconduct of the owning family led to poor safety measures and unlawful business practices such as overloading and excessive remodeling that may have compromised the ship.

The amount of money that Yoo misappropriated from company funds or evaded in taxes is estimated to be 10 million won.