Income and spending up in 2014 first quarter

Income and spending up in 2014 first quarter 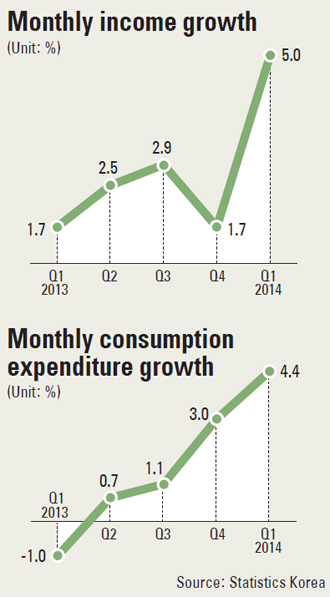 Thanks to a pickup in the job market, average monthly household incomes and expenditures have both moved up.

According to data released by Statistics Korea yesterday, the average monthly income of households across the nation stood at 4.4 million won ($4,290) in the first quarter of this year, an increase of 5 percent from the same quarter last year, on a nominal basis.

Real growth in monthly incomes recorded 5.3 percent. Both nominal and real figures experienced the largest growth since the third quarter of 2012.

The growth in incomes resulted from an increase in jobs and incomes of people who are newly employed. The number of Koreans who found jobs rose 729,000 in the first quarter compared to a year earlier.

Monthly household expenditures expanded 4.5 percent to 3.49 million won in the first three months of the year from a year earlier.

Both consumption-related and nonconsumption expenditures increased by more than 4 percent.

The average monthly consumption expenditure hit 2.65 million won, up 4.4 percent from the same period last year, the biggest growth since 2012.

The Ministry of Strategy and Finance interprets the growth in expenditures as a positive sign for further economic recovery.

“Owing to the growth in disposable incomes, consumption expenditures have been rising amid recovering consumer confidence in the market since early last year,” the ministry said in a report.

The ministry noted there was remarkable growth in sales of automobiles in February, which led to a 12 percent growth in total expenditures on transportation by households.

Nonconsumption expenditures also grew as the number of new employees rose. Those expenditures include income taxes, premiums for pensions and other social insurance.

Household surpluses averaged 909,000 won in the first quarter, growing about 6 percent compared to a year before. However, the average surplus contracted from 920,000 won in the final quarter of last year.

The ministry said the Gini coefficient for the Korean economy in 2013 stood at 0.302, the lowest since 2006, indicating that income distribution has improved significantly.

The proportion of middle-class households across the nation hit 65.6 percent, the highest since 2006.

The ministry analyzed that the middle-class percentage expanded slightly due to a 0.6 percentage point decrease in top earners. That is because the median income level rose 3.5 percent to 1.83 million won, which raised the threshold for the top income class.

“Job creation has apparently contributed to income growth, leading to more spending by households,” said Oh Sang-woo, an official at the ministry. “By front-loading the budget in the second quarter, the government will help maintain a virtuous cycle in the economy.”

The second quarter may be weaker with the plunges in sales that followed after the Sewol tragedy in April.